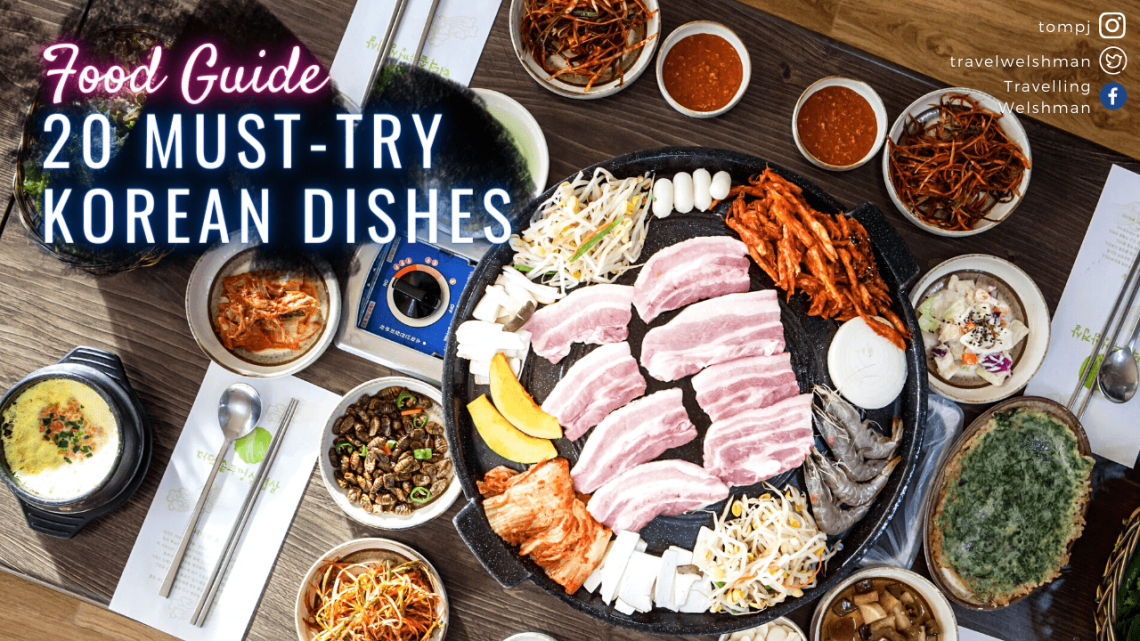 Plenty of nations are recognised for their culinary skills. The likes of France, China and even Mexico are all highly regarded for their bountiful flavours and mouthwatering dishes. Though for me personally, one country stands out above the rest, Korea!

This criminally underestimated nation flies beneath the radar of many hardened travellers and culinary enthusiasts. The sheer variety of flavour combinations ensures that each bite is unique and takes you on a sensory rollercoaster of delectable delights.

Whether you’re searching for food along the streets of LA or amongst the skyscrapers of Seoul, let me show you 20 Korean dishes you have to try!

Hands down, the most iconic Korean dish is one that’s become synonymous with this fabulous nation. This signature dish defines Korean food, and has been around for more than 2,000 years, dating back to the Silla Dynasty!

Kimchi is the beloved spicy side dish that’s a common feature of every dinner table. It consists of Korean cabbage, radish, onion, ginger and scallions all spiced up with some chilli powder and garlic. The beloved mixture is then left to ferment, allowing all those wonderful flavours to seep right into the cabbage.

With more than 200 variations found across Korea, this traditional dish can be eaten on its own or added as a welcome side dish. Kimchi is also the basis for many other dishes including kimchi stew (kimchi jjigae), kimchi pancakes (kimchijeon), and kimchi fried rice.

Another must-try during your time in Korea is bibimbap, a filling and nutritious dish that’s widely available in restaurants and street markets. Once the meal of choice for Korean royalty of old, this lunch-in-a-bowl has become the must-have meal for the masses.

It commonly consists of warm rice topped with mixed vegetables, meat and a raw egg coupled with soy sauce and a dollop of Korean chilli paste (gochujang). The beauty of the dish, and Korean food in general, is its versatility. Much like a Korean poke bowl, a multitude of side dishes can be added to fit your taste!

Though good old Kentucky may have the most iconic fried chicken recipe, Korea has its own equally delectable variation! Inspired by their American counterparts, Korean Fried Chicken adds a thick coating of sweet and spicy sauce before double frying it in vegetable oil.

As a result, the meat remains juicy on the inside, while the lightly battered skin stays crunchy with very little grease. If you though the American version was finger-lickin’ good, wait till you try this one!

Tteokbokki is a traditional Korean street food that’s made with thick slices of garaetteok (boiled rice cake), fish cake, onions, garlic and mixed vegetables that are stir-fried and doused in a sweet red chilli sauce.

Easily recognised by its bright red-orange colour, this popular snack item is found throughout the country in everything from restaurants to side-street vendors. It’s so popular that there’s an entire district of Seoul devoted to the dish!

This well-known meat dish has been around for over a thousand years since the Joseon Dynasty. The thin slices of marinated beef sirloin cooked alongside sliced onions, green peppers, and garlic over a charcoal burner results in a distinctive smoky flavour.

It’s also a dish that requires a lot of prep, as the meat is often marinated for 2 to 4 hours in a mixture of soy sauce, sesame oil, onions, garlic, ginger, black pepper, and sugar to enhance its flavour and tenderness.

It’s also typically combined with other elements of Korean cuisine, such as utilising lettuce wraps or mixing it with a bit of kimchi, naturally!

Many people are worried if street food is safe to eat or not.

What should you look out for and why is it much safer than you think?

Yet another American staple has been given a unique Korean twist, Samgyeopsal has become a social icon throughout the country.

With an electric or coalfired grill sitting in the middle of a dinner table with a surrounding of meat slices, fresh vegetables and a healthy heap of lettuce leaves, it becomes a fascinating arts and crafts project as diners prepare their own dishes and use their imagination to create imaginative little tableside wraps.

Going out for Samgyeopsal becomes an entire event as meat sizzles under thick hazes of smoke amongst a loud raucous atmosphere and countless empty bottles of soju.

Korea has a wonderful habit of taking another nation’s dish and making it it’s own. Yet, the US isn’t the only source of culinary inspiration, as Korea has also created its own version of sushi! Believed to result from Japanese occupation, gimbap took the basic elements of this iconic dish and turned them into something unique.

A combination of sauteed vegetables, beef, pickled radish, and rice are all rolled up tightly in a sheet of laver seaweed (gim), and then sliced into bite-sized chunks.

Of the many kimchi variations available, kimchi stew (jjigae) is by far one of the best! The stew itself also has a bunch of variations, though they typically contain meat, seafood or vegetables in a broth seasoned with chilli paste (gochujang), soybean paste, fermented miso (gaenjang), or salted fermented shrimp (saeujeot).

Though it could also be enjoyed as a main meal, it’s usually served as a palate cleanser between heavier dishes. Either way, delicious!

Continuing the Korean love of fusion food, this Korean-Chinese concoction is amongst the country’s most beloved. Most locals will eat it at least once a week! The dish is also traditionally eaten by lonely singles on Black Day (April 14th). Those heartbroken souls that didn’t receive any gifts during Valentine’s Day wear black attire and gather to enjoy black-coloured food such as jajangmyeon.

The dish is made up of thick handmade wheat noodles topped with raw cucumber slices and a mixture of black soybean paste, diced pork and vegetables.

Drinking is BIG in Korean culture, and nothing goes better with a couple of beers than some good hearty food, even more so on the day after! A glorious array of stews and soups have been created to remedy those agonising hangovers.

It consists of a beef broth mixed with cabbage, radish, bean sprouts, and chunks of congealed ox blood to create a delicious tonic. Trust me, goes a long way to freshen you up after a long night of debauchery!

The ultimate guide to visiting the iconic Bug Market in the heart of Beijing!

Find out what’s on offer and what critters you can eat!

Koreans love two things wholeheartedly; fried chicken and beer, so why not combine the two? Though the thick sauced, sweet and spicy variety is most definitely worth its own mention, regular fried chicken has also become a Korean institution.

Going out for some deep-fried goodness alongside unhealthy quantities of beer has become commonplace, and is something that everyone in one way or another will take part in. So, you should too!

Symbolising longevity of life and good health, bibim nengmyun is served in a stainless-steel bowl with a cold broth, cucumbers, Korean pear, a boiled egg, and slices of cold-boiled beef over a helping of noodles.

Either made from flour and buckwheat or sweet potatoes, these super thin noodles can also be made from seaweed or green tea! The noodles are traditionally served without cutting, though customers are free to request a trim-down.

Yet more American influence in a bowl, this one gets back to the true roots of the US presence in Korea!

This mishmash of sausages, Spam, bacon, American cheese, instant noodles, tteok, and mixed vegetables is a result of the Korean War. As meat was scarce at the time, military chefs used their creativity to find ingredients amongst the surplus foods from the American army base stationed in Seoul, hence the name.

Local Koreans believe in “fight heat with heat.” As such, often the hottest dishes are eaten in the heart of summer! The most common dish to do just that is samgyetang, a thick, glutinous soup with a small spring chicken stuffed with chestnuts, garlic, ginseng dried jujubes and glutinous rice.

The ingredients are slow-cooked until the essence of the ingredients seeps into the tenderized meat, leaving behind an aromatic and flavourful broth.

Now, this is a dish that we are all too familiar with! Though we may have enjoyed these countless times (especially if you’re a broke-ass student), this is Korea, and naturally, they’ve got their own unique creations.

There are plenty of home-grown brands available throughout the country. From face-meltingly spicy to ones drowned in powdered cheese, others with a touch of apple juice, there’s everything on offer. As they’ll be sold in supermarkets throughout Korea, you’re welcome to take some back home too!

The newest food trend sweeping the world is slowly becoming a part of everyday life.

What is bubble tea, and what is its story?

By now, you could tell that Korea is a big fan of stews and soups! This particular variety uses an unexpected flavour combination that results in some delightful oral sensations. Fluffy chunks of soft tofu, clams and a raw egg are all cooked within a spicy broth to create yet another mouth-watering mix.

Korea is also known for making the most of the oceans that surround it. There are some incredible seafood dishes available around the country, though few can compete with soy sauce crab!

Affectionately called “rice thief,” the dish is considered so delicious that you would keep eating more rice just so you could stomach eating even more of the crab!

With sour notes mixed with some bitter overtones and completely cold, it certainly doesn’t seem appealing. Though the proof is in the pudding as they say, and for South Koreans, it’s a centrepiece as far as seafood is concerned!

It’s true that our Western palates might find some Asian food choices to be less than appealing. For many, a hearty dish of pig and cow small intestines doesn’t sound too appetising, though don’t let the horrific anatomy fool you!

Whether it’s prepared into soups, stir-fried, or grilled, this slightly chewy, earthy meat certainly takes a little getting used to, but equally deserves a place on this list!

While on the topic of less-than-delicious sounding dishes, how about pig intestines stuffed with blood? With roots in Mongolian cuisine, the dish combines cellophane noodles, vegetables, and meat to create a very unique sausage-like item.

Don’t worry, it tastes much better than it sounds! For a similar type of food for us Brits, think of it as Korean black pudding! Not so bad now is it?

To top off the list, let’s end with a sweeter side! Following Korea’s love of variation, this cold dessert can use a variety of ingredients. The base can consist of sweetened red beans (pat), ice cream or fruit. There is also a variety of toppings including tteok, condensed milk, syrups, or cornflakes, all topped on a bed of shaved ice (bingsu).

Thank you so much for reading Food Travel Guide: Top 20 Must-Try Korean Dishes! Now check out these other helpful articles!

Teaching Online: How to Make Money While You Travel 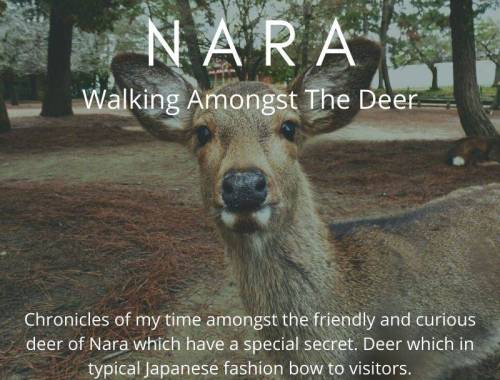 Nara: Walking Amongst the Deer 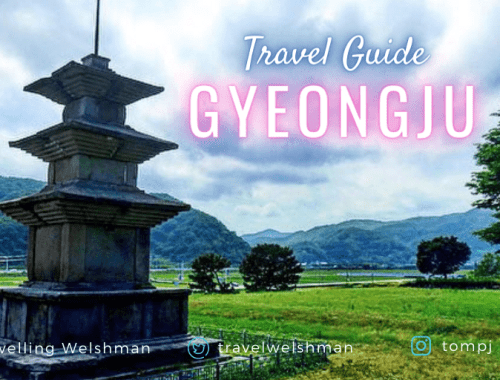 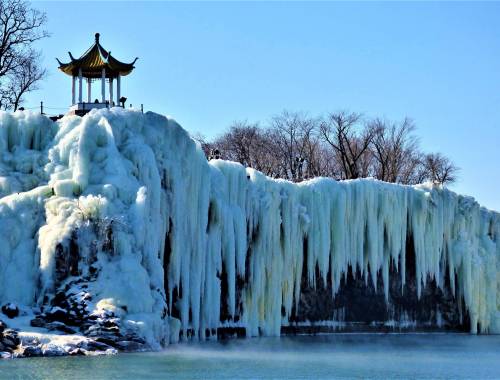