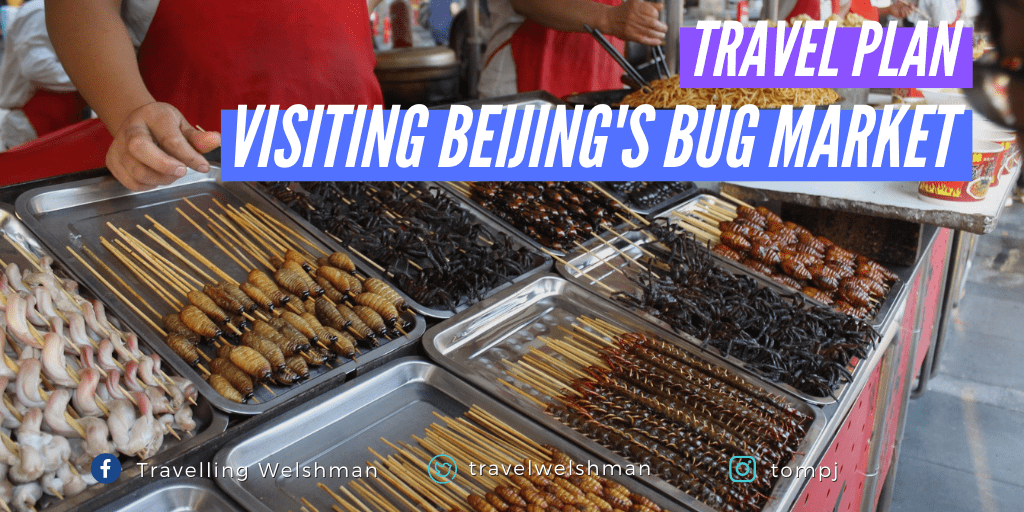 Along with visiting beautiful relics and experiencing new exotic landscapes, there is one aspect of travel that people cherish more than anything, food! Diving into the culinary world of different nations and cultures becomes a vital part of the experience! There’s no better place to find some local delicacies than in the bustling street markets, where local favourites are abundant. Beijing on the other hand has something a little different on offer, nothing less than a mouth-watering bug market.

In the heart of a luxurious shopping district surrounded by megalithic malls and big named capitalist brands is an alley where you can chow down on some deep-fried critters to your heart’s content! So let me take you through everything you need to know about the infamous bug market of Beijing.

The Wangfujing Night Market, also known as the Donghuamen Night Market, is an offshoot of the pedestrianised Wangfujing District at the heart of Beijing. Due to its close proximity to the Forbidden City at the centre of Beijing, the area has one of the richest histories of any district in the city.

Its days as a commercial and retail hub started as early as the Ming Dynasty, before becoming the home of aristocratic estates and royal residences during the Qing Dynasty. During that time, a well full of sweet-tasting water was discovered close by, which would later lend its name to the area, “Wang Fu” (princely residence), “Jing” (well).

During the streets latter years and with increased foreign arrivals, the avenue became known as Morrison Street, named after the Australian journalist George Ernest Morrison who frequently visited the area to find books on China to add to his collection.

Many historic Chinese stores still have a place in the area, though today they’ve mostly been replaced by high-rising department stores and big-name brands. For that reason, many consider the Wangfujing Market to be the last remaining piece of “Old Beijing” that survives with the traditional sound of advertising screams resonating out from the alleyway.

A few foreign articles online say the bug market was closed in mid-2016, though these are very outdated. It may have slowed down temporarily during that time, as the market did receive excessive complaints of unhygienic conditions and nightmarish noise which became too much to handle, which for Chinese standards really says something.

However, the close was by no means permanent. I should know, as I visited the bustling market multiple times between 2017-2019! So don’t believe everything you read….expect for this article of course.

The market itself is found wedged between the latest in capitalist brands in the highly lucrative Donghuamen District. The main shopping street of Wangfujing Dajie, which the market is attached to, is also home to the Oriental Plaza department store and Beijing Hotel to the south, Sun Dong’an Plaza department to the east, and St Joseph’s Cathedral and the Foreign Language Bookstore to the west.

To get there, take subway line 2 to Wangfujing Station and get out at Exit C2. From there, keep walking north for about 50 meters until you see the KFC on your right side. On the opposite of the KFC is a decorated archway that marks the east entrance to Wangfujing Snack Street.

What’s On the Menu?

So let’s find what you can sample on your culinary tour of the iconic bug market of Beijing! And don’t worry, it’s not all vomit-inducing goodies, there are plenty of normal-ish eats on offer too!

Creatures For Your Consumption

Though most items are your everyday normal snacks that you’re likely to find in any Chinese market, the star attraction are what made the Wangfujing market so notorious in the first place; BUGS, and a hell of a lot of them at that!

The spectrum of creepy crawlies include tarantulas, silkworms and even millipedes! Who knew they were even edible?! Though not to worry, there are far more critters that cover the different animal groups. The most iconic of all is the scorpions, which are skewered alive and left to squirm on display for visitors to gawk at. And unless it hasn’t been made adamantly clear by now, this might not be the best place for hardcore vegans and animal rights activists.

But the fun doesn’t stop there, there are plenty more of god’s creatures you never imagined were even edible. From snakes to seahorses to deep-fried starfish and even baby sharks, doo doo doo doo doo.

Many people worry if street food is safe to eat or not. What should you look out for and why is it much safer than you think?

Don’t worry all you sensitive folks out there, the street isn’t just a slaughterhouse of tiny critters, there are still plenty of conventional street snacks on offer, most of which are unbelievably delicious! That being said these are still Chinese street snacks, so some items may still seem a little strange for the average foreigner. Chicken feet or whole baby birds anyone?

Yet amongst the strangeness are still some mouth-watering treats like crab legs, enormous prawns, steamed rice balls, fruit coated in glazed candy and plenty of chestnuts to put everyone in a festive mood. And for the simpler palettes, more than enough noodle dishes and fruit mixes thrown together.

The market also has its fair share of Islamic foods to represent the Muslim cultures of Xinjiang province and the lesser Xi’an community. Such unique flavours include tofu pudding, various cooked mutton and beef, braised chicken, sautéed mutton, and braised tripe.

You’ll find that many vendors will aggressively forbid you to take a photo of their items, though others will happily put on a show for the camera! And like any good tourist site, there are plenty of other attractions designed to grab the attention of the most disinterested visitor.

Artisans blow candied sugar into intricate designs, and a small stage at the end of a side alley has regular musical and acrobatic performances. Though easily the best entertainment is just to sit back and people-watch the reaction of those tucking into different delicacies! That’s why most Chinese people come to the market in the first place!

Do Chinese People Really Eat This?

Short answer, no, they don’t. Some documentaries filmed in the market give the impression that bugs are a permanent fixture of Chinese menus and play a normal role in daily life. However, that isn’t the case at all.

Okay, certain regions might have peculiar delicacies that can definitely be considered unconventional (we’ll just glide past how some villages in the south of China still serve dog meat), though eating insects is by no means the norm.

Chinese people come to the market for the exact same reasons as any tourist! They also find the spectacle to be incredibly unusual and, more often than not, have the same disgusted face that you’d have! If anything, you’ll find more tourists eating the unusual creatures than you will local Chinese! And for many locals, that becomes the main attraction (more on that below)

The Wangfujing Bug Market isn’t the only highlight on offer in Beijing!

The Bug Market is the definition of a tourist trap; a blatant attempt at attracting as many visitors as possible (both local and foreign) to draw gullible tourist cash by charging extortionate prices. The market itself lacks the cultural heritage which surrounds it and acts as nothing more than novelty entertainment.

Other than the unusual critters, the market is like any other you’re likely to find in the country. In fact, there are plenty of other markets that are worth much more of your time! Not to mention that the items in the Bug Market are highly expensive, even by Beijing standards! A stick of scorpions costs roughly 40 CNY, which is close to £5. Needless to say, it’s completely overpriced, though yet again, what do you charge for something like that?….

Yes, the market is a complete tourist trap…but so is the Eiffel Tower, the Pyramids, or even the Great Wall, but you’re obviously going to see them! Whether you decide to tuck in or not, it’s still an incredible experience to go and marvel at what is being prepared.

It’s also one of the few opportunities you’d ever have to try these things for yourself. When’s the last time you saw seahorses or starfish on the menu? Yes, it’s touristy, and yes, it’s overpriced, but so what? It’s an iconic site that you damn well know you’d want to check out so why does it even matter?

The Real Attraction is YOU!

Despite being a near-super power and having a strong influence across the globe, China, in general, still isn’t that used to seeing foreigners. Even when I lived in Beijing, one of the country’s most modern and progressive cities, I’d get photographs taken of me daily, most of the time without my permission. And amongst the quasi-photoshoots, I’d get stared at each and every day as people were simply fascinated at seeing a white boy walking through the streets of the capital. This is even more true the more rural you go.

Thus, the market itself literally acts as a “tourist” “trap” by luring in gullible foreigners with the promise of unique creatures to snack on, which in turn brings in local Chinese people who come to stare at these strange outsiders snacking on even stranger creatures! They’ll stand and gawk at you and take your picture, as YOU will have become the main attraction of the market!

Countries across Asia have formed a pro-democracy alliance linked by one common love, milk tea. A movement that has spread across the world.

Is it Really That Weird?

After visiting the market, I found myself being very philosophical. To my skewed Western sensibilities, the sight of tarantulas, scorpions and seahorses ready to eat is pretty damn weird, but why?

Am I really going to judge a dish because I don’t eat it? Plenty of nations eat delicacies that others around the world would find strange. Guinea pigs in Peru and tuna eyeballs in Japan are just some things many of us would find a little odd. Jesus, we’re so sensitive in the UK that the public lost its mind when they found out horse meat was included in a supermarket’s burgers!

Before you vegans blow a blood vessel, I hear your cries that NO animal should ever be eating, your tears have not gone unheard. That being said, as a meat-eater, wouldn’t it be hypocritical of me to say “feasting on the adorable little carcass of a baby lamb is fine, but tarantulas are crossing the fucking line buddy!!” Either all of it is okay, or none of it is.

If for nothing else, you have to try everything once, right? These critters (like most others in the world) are edible, and what’s more, they’re not that bad! You’ve got to experience different things, right? So next time you swing by Beijing, try a couple of deep-fried scorpions, they’re actually quite good!

The Ultimate Guide to Teaching Kids: Pros and Cons