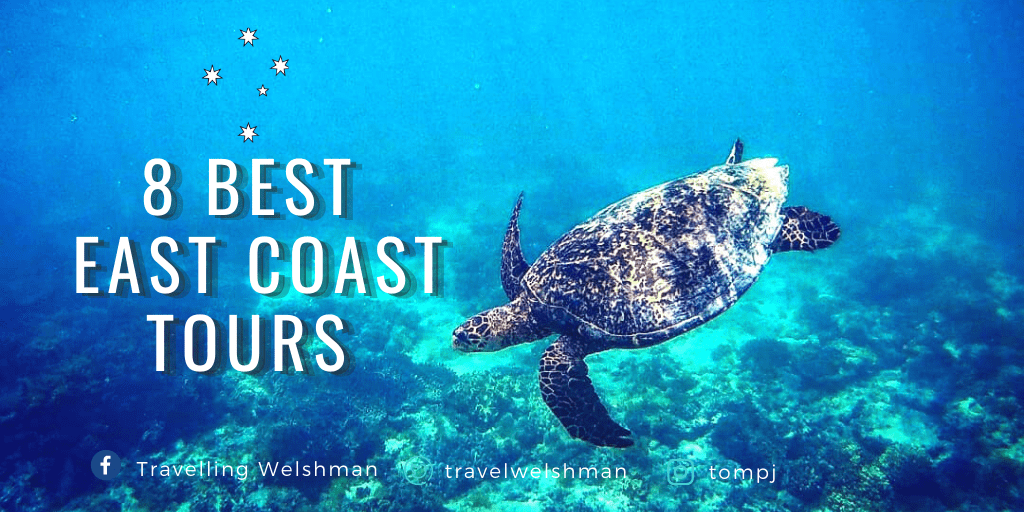 The east coast of Australia is amongst the most popular tourist routes in the world, and there’s little wonder why! With landscapes ranging from lush rainforests to barren deserts and a plethora of unique wildlife scattered in-between, there are many things worth seeing. More importantly, there are some amazing tours and adventures to be a part of along the east coast.

There are limitless opportunities, from camping on a desert island surrounded by dingoes to luxury sailing trips or diving in the Great Barrier Reef. Though tours aren’t in short supply, the challenge is choosing the right one. You don’t want to spend £100-200 on a tour which doesn’t pay off and leaves you wondering why you wasted your money. Backpackers have a tight budget, so it’s important to know which prices of admission are really worth paying for.

So which tour should you choose? To help you with this tough choice, here’s a list of the very best tours along Australia’s east coast!

Not only is this the best east coast tour, but it’s the best in all of Australia! Fraser Island is the world’s biggest sand island standing in the middle of shark-infested waters off the coast of Queensland. The island is the venue for rugged adventures as you spend a couple of days living in the wilderness. The sheer amount of experiences you get there is what makes the trip so worthwhile!

Your days are spent exploring the island in monstrous 4x4s (some tours allow you to drive yourself!) searching for some of Fraser Island’s best hotspots. The tour groups drive in convoys along the coastline where you’ll come across abandoned shipwrecks and spectacular rock formations that you’ll be able to climb to get a better look at the island’s pristine environment.

The fun part comes when the trucks delve deeper into the thick rainforests that cover the centre of the island to discover some freshwater lakes and rivers. Each one has its own unique trait! Lake Mckenzie’s beauty could compete with any beach around the world! Though Basin Lake may not be as pretty, its silt does wonders to your skin! Lake Wabby on the other hand is an oasis wedged between enormous sand dunes and thick rainforests. Inside the lake’s emerald green waters are tiny fish that gently nibble away at your dead skin, giving you a free scrub!

You’ll also enjoy going down a lazy river called Eli Creek (nicknamed “Hangover creek”), which you can flow down with rubber rings. It’s the perfect relief you’ll need after the night you spent in camp! At the end of each day, you return to your campsite to prepare dinner over barbeques and finish the limited amount of booze you brought with you. Be sure to check out the only “nightclub” on the island, the nearby wooden gazebo with a disco ball.

Oh not to mention that the island is home to wild dingoes!! If you’re very lucky, you might be able to spot one scuttering by, but be sure not to feed them, as the government kills them if you do!

Others might consider this to be the best tour Australia has to offer! Spending a few days sailing amongst the Whitsunday Islands has become a rite-of-passage for most travellers in Oz. The star attraction is Whitsunday Island itself, which at low tide, is one of the most awe-inspiring places in the whole country. As the ocean pulls back, it leaves behind a sandbank that allows you to walk across the ocean filled with lemon sharks and stingrays!

You’ll also get a chance to experience the Great Barrier Reef as you’re taken to some of the best snorkelling spots amongst the islands. If you’re lucky you might even spot some dolphins and maybe a few turtles! Later on, your evenings are spent watching the sunset on the deck as you enjoy your limited supply of booze with the rest of your tour group as the boat’s crew prepare dinner for you. If you ever wanted a slice of luxury, this is it!

There are all kinds of tours to suit every traveller’s needs. Some are more party-oriented while others are much more relaxed. They also range from day tours to spending a couple of days onboard and spending the night sleeping beneath the stars.

Duration: Tours can range from a couple of hours to a couple of days! Typically most tours are 2 or 3 days long. However, if you want something longer you might have to hire a boat privately, which could cost thousands!

Are you really gonna go all the way to Australia without exploring the Great Barrier Reef?! Covering almost a 1/3 of the country, there’s plenty of opportunities to swim amongst the bountiful ocean. Regular tours leave from Magnetic Island and Airlie Beach, but there are few better places to experience the reef than from Cairns.

Countless boats full of tourists are taken out every hour to experience some of the best spots across the reef. Some tour companies even come with their own glass-bottom boat to give you a closer look at the surrounding ocean life. It’s also one of the best places to do some scuba diving! If you’re lucky you’ll be able to spot some barracudas, reef sharks and some enormous sea turtles!

Duration: For the most part these tours are day-trips.

The oceans of Australia have so much to offer! From Byron Bay all the way up to Cairns, you can have the experience of a lifetime; kayaking with some friendly dolphins! Most tours just offer an opportunity to paddle over the sea to get a different perspective of the amazing landscape behind you. However, as Australia’s oceans are so abundant, there’s a good chance you’ll run into something! You might catch a glimpse of a turtle or two, maybe even a shark!

Of course, there can’t be any guarantees. There’s a chance you might not see anything, it’s luck more than anything. Many reputable companies might offer to take you out again but don’t expect to get a refund.

Australia is known for its incredible wildlife; kangaroos, koalas, emus, wallabies, crocodiles and horrendous amounts of spiders! The last thing you’d expect on that list would be penguins!! Yet these adorable little creatures have made their homes on Phillip Island just off the coast of Melbourne. As the sun sets each night, hundreds of visitors come to watch the Penguin Parade as hundreds of little penguins emerge from the sea and waddle their way to their homes after a long day fishing.

The island is home to even more Australian wildlife! At the Phillip Island Koala Reserve, you can walk along wooden boardwalks across the top of eucalyptus trees to observe koalas in their natural habitat. In the Philip Island Nature Park you might also catch a glimpse of happy seals playing along the coast. Last but not least, at Warrook Farm you’ll even have the opportunity to get up close and personal with some kangaroos!

Price – This doesn’t need to be done as part of a tour. If you can get yourself to the island, you can pay a bundle ticket for around £32 which allows access to all the parks on the island. If you don’t want to pay or go all that way, to decks at St. Kilda. Penguins also arrive here every evening and it doesn’t cost anything to see them! Otherwise, tours can cost between £60-100.

Australia is known for its laid back attitude, but there’s one area of the country which is the chillest of all. Byron Bay and the surrounding area is renowned for being the absolute hippie paradise. Camper vans driving, dreds swinging, guitar playing, hacky-sack kicking, weed-smoking paradise! One town, in particular, is known as the ultimate hippie and alternative lifestyle capital, Nimbin.

Two tour companies run regular tours which leave from Byron Bay and pass a number of spectacular natural wonders and iconic landmarks on the way to Nimbin. The sites are amongst the gorgeous hills of the Byron Bay hinterland, including the Nightcap National Park and Minyon Falls. It’s an opportunity to experience some of the miraculous natural beauties surrounding Byron Bay, so you don’t just spend your time getting high as balls.

Price: There are only 2 companies that operate tours; Grasshopper and Happy Coach. They cost £38 and £29 respectively.

Most of Australia’s east coast tours revolve around its spectacular wildlife, and Magnetic Island is no different! Not only is the island home to 800 wild koalas, but also many wallabies, over 180 bird species and 140 fish species! If you’re here during the winter months, you might even spot some whales! You could also swing by Dr Rick’s Aquasearch Aquarium which has some local marine life from around the island on display.

The island also offers year-round swimming with a safe swimming enclosure at Horseshoe Bay. Be sure to visit Picnic Bay, which is the oldest neighbourhood on the island and has some displays detailing the history of the early settlers on the island.

Duration: Mostly day trips lasting a few hours but can also be a couple of days.

The last of our east coast tours is yet another opportunity to explore Australia’s incredible wildlife. The Atherton Tablelands are home to UNESCO-listed tropical rainforests and some of the most breathtaking sites in the country. Tours leave from Cairns daily and take you deep into the thick jungles to spot some native wildlife. You’ll be taken to some of the area’s highlights such as the Lake Barrine crater lake and Paronella Park. For most, the star of the show is being able to swim beneath Millaa Millaa Falls.

Duration: Mostly day trips but can also have a few days camping! 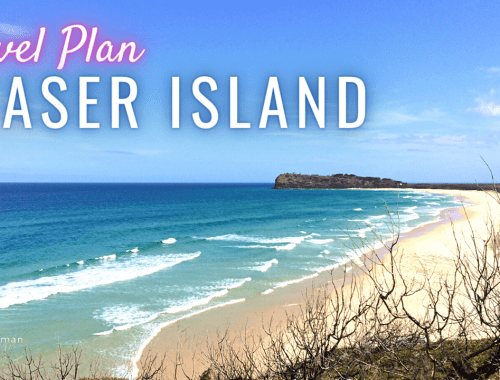 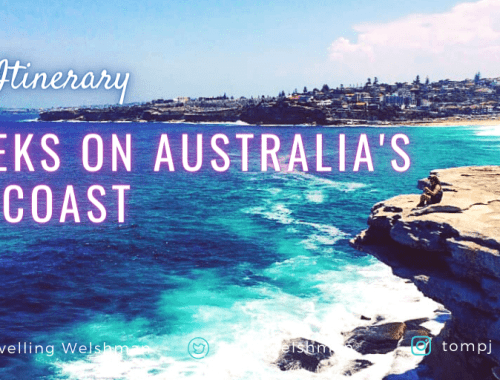 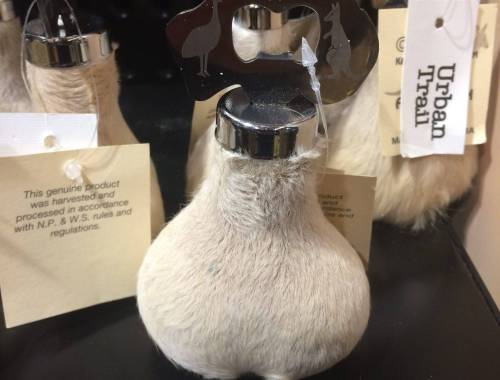