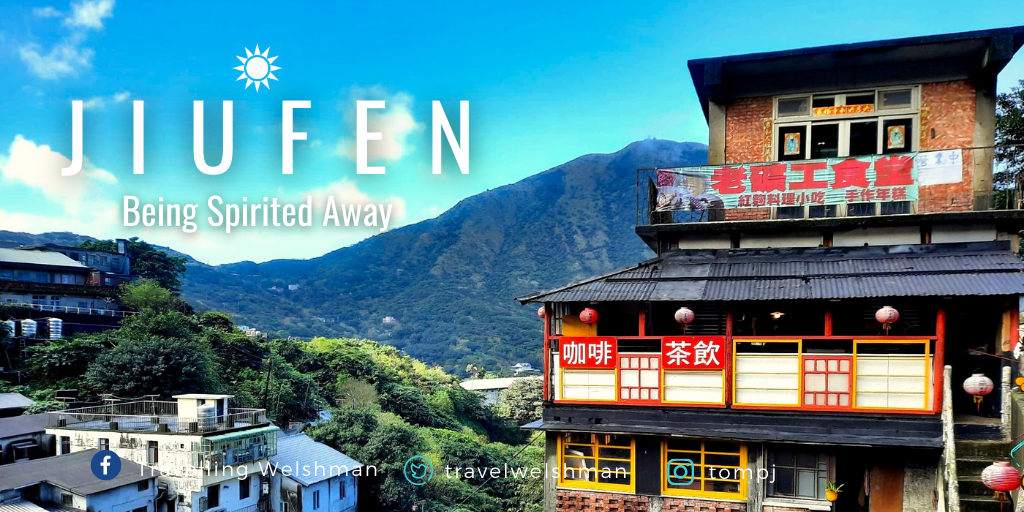 There are a couple of places out there that you’d want to visit JUST because they’re in a movie. Everyone wants to be Leonardo Di Caprio on the beach of Koh Phi Phi. In Taiwan, one place has been the ultimate destination for movie buffs, Jiufen. People believe this town inspired the critically acclaimed Japanese anime movie “Spirited Away”. Well…that may not actually be true, but that doesn’t matter. As far as everyone is concerned, this is Spirited Away and the home of No-Face.  I’d only seen the movie since being in Taiwan and instantly fell in love. With Jiufen only being an hour away from Taipei, it made for the perfect little trip as Christmas approached.

So here are the chronicles of my time getting spirited away along the narrow alleyways of Jiufen.

What Put Jiufen on the Map

Japanese anime movies aren’t the only reason Jiufen has gained such notoriety! Its been highly regarded across Eastern Asia for enormous amounts of gold! Since the 17th century, the mines of Jiufen have been valuable property for whoever ruled Taiwan at the time. From the early Chinese settlers to the Japanese colonists, everyone had a piece! So where better to start than the former gold mine? 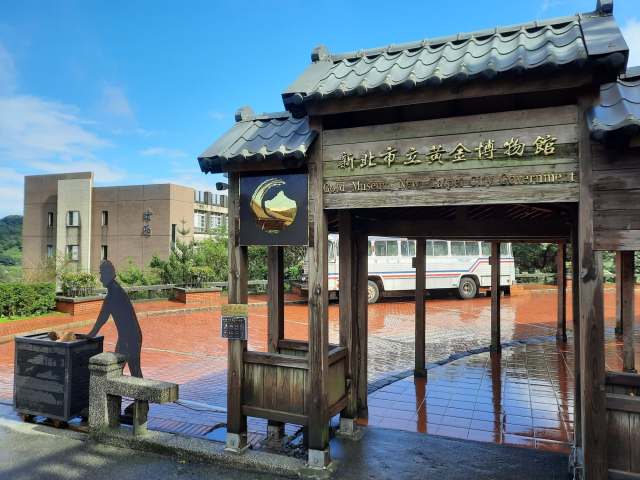 We sauntered deeper into the valleys until we reached the star attraction, the actual mine itself. Though the mining industry had long come to an end, the mine remained as a display for visitors to briefly experience what it must have been to be a miner. The long narrow tunnel led 100 meters or so deeper beneath the mountain until it reached a crossroads which had a display showing how the mine would have worked back in the day.

The mine had a small museum detailing some of the science behind what used to be one of the most valuable gold mines in the world. It explained how there was an unbelievable high concentration of gold throughout the mountain. The museum also had an enormous gold bar valued at almost £10 million, which you could reach in and touch. It was as if the sly bastards knew that was your only chance to hold that amount of money in your hands.

The museum also showcased the depressing history the mine had during WWII. During Japanese control, the island played host to a prisoner of war camp which was mostly made up of British soldiers. These unfortunate souls were used as slave labour to mine the gold and were brutally punished if their daily quotas weren’t met.

A Preview to the Old Street

The Old Street that runs through Jiufen might be the region’s highlight, but the lesser-known Qitang Old Street was a nice little preview of what was to come. Due to the Corona crisis and perhaps the time of year, it wasn’t very lively with most places shut. It didn’t really matter, it didn’t take anything away from the beauty of the area. With the added bonus of completely empty streets, it made it all the better!

It was also the perfect place to stop off for a bit of lunch. We kept walking along the hillside until we came across a tiny restaurant overlooking the valley that had a very personal feel. You could sense how long it had been there. There’d been no effort to decorate or any urgency for that 5-star rating. The kitchen may never have been cleaned! Plastic tables and mismatched chairs, it was the perfect place! The food was beautifully simple as you’d expect, bursting with the flavour of the area. All manner of pork and the freshest of vegetables that didn’t need a single thing added to it.

Rock samples were on display across one of the restaurant’s walls. Jessie had a theory that the old man that kept drifted in and out might have been a miner in the past. Even though the mines were shut around 30 years ago, given his age, it was a real possibility.

Getting a Better View

After an obligatory visit to a temple higher up the hillside, we headed further towards one of the highest peaks in the area, Teapot Mountain. When we saw the stairs though, we questioned whether we really wanted to! Luckily the view became a big motivator as it just kept getting better the higher we scaled, so on onward we went!

As we got higher we got an incredible view of the entire area. Not only did we have a spectacular panoramic view across the rising peaks and dips of the valleys, but we also had the perfect view of another of Jiufen’s biggest highlights, the Ying Yang Sea. As water flows through the mineral-rich mountains, the streams pick up high amounts of pyrite (Fool’s Gold) and iron, both of which are insoluble. Once the stream runs into the ocean, it doesn’t mix, splitting the sea into two distinctive vibrant colours.

As we got closer to the coast, we came across more evidence of the lucrative mining industry that put this place on the map. We passed the remains of many crumbling buildings, one of which was at the end of a railway that led up the mountain. The dilapidated structure made for an incredible photo-op as it overlooked the entire coastline, making one hell of a view. It also gave us a chance to get even closer to the Ying Yang Sea and a better look at its contrasting colours. It was a little preview of what was to come tomorrow. 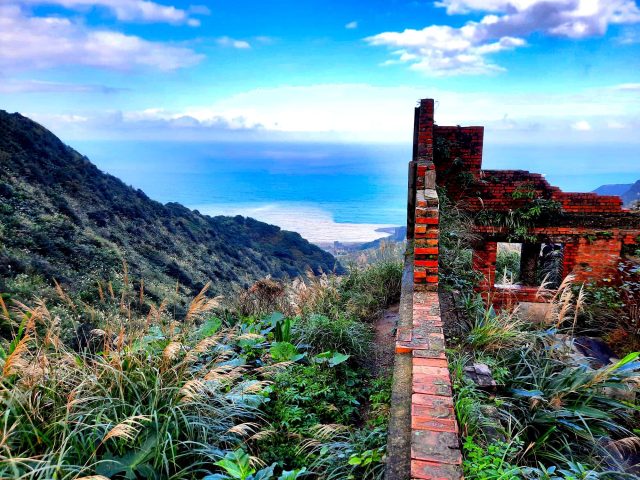 It was time to head to our hotel via Jiufen’s main attraction. We were dropped off at the end of the winding street and followed it as it snaked its way along the hillside. The narrow streets were packed with visitors as you’d expect. Each side of the lane was lined with a spectacular number of stores, enticing salespeople offering free samples and bright red lanterns throughout.

Even though I’ve been to tonnes of markets (particularly in Taiwan), this one is just iconic. The streets resonated their ancient past, a simpler time. Its clearly an enormous tourist trap, but who cares? Its to be expected! It was also the best opportunity to pick up a couple of snacks along the way. Sadly, after spending so much time in Taiwan’s night markets we had pretty high standards, and the food just wasn’t up to our expectations. 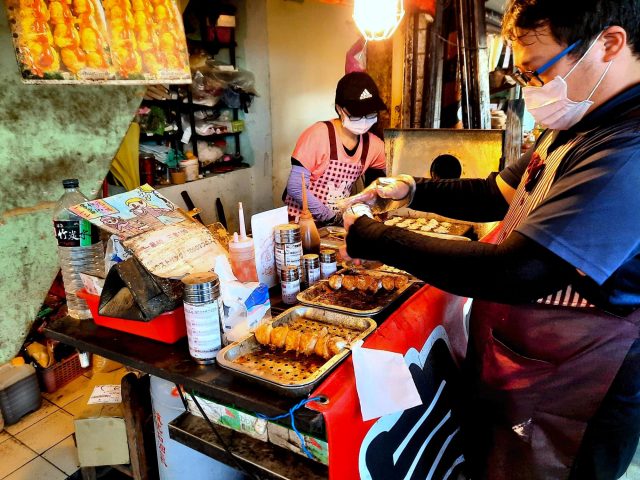 Coming Into a New Light

Though the sky wasn’t visible from within the claustrophobic alleyways, the night brought with it a whole new vibe. Still amongst the hillside’s narrow alleyways but just shy of the old street itself was our place for the night. We headed back into the narrow lanes for a more leisurely look at the street. More importantly, we went to see Jiufen’s most iconic building, the A-Mei Teahouse. Many people thought this is what inspired the bathhouse in Spirited Away, though according to the director himself, this isn’t true.

Regardless, the stunningly rustic teahouse with its many open windows and rows of red lanterns is the iconic image of Jiufen. It’s upper balcony overlooked the coast all the way back towards Taipei, making it the town’s number one hotspot. As the sun disappeared, the lights illuminated, bring a whole new light to the building. Everyone else had the same idea too as crowds of people gathered for pictures and to pose like wanna-be influencers. We just wanted to see it in its full glory at sunset. We’d be back the next day for our own experience.

Back to the Coast

The next morning, we headed back towards the coast to see the sites we’d left behind. The first was the aptly named Golden Waterfall. The widespread fall broke into different streams that flowed haphazardly across the yellow tinted stones. Just like the Ying Yang Sea, iron deposits had been left behind across the stone’s surface leaving behind the uniquely coloured falls.

Our last site was yet another reminder of the area’s mining past, and probably the most significant of them all. Known as the 13 levels, it’s an eerie series of buildings that incrementally rise up the hillside away from the coast, each creepier than the last. It almost looked like a castle complex which had just been left behind for the elements to reclaim. The explorer inside me wanted to jump a fence and wonder a little inside, however, signs pointed out you’d get fined and there was no way that Jessie would have let me.

We had an appointment back at the Old Street. It would be a shame if we had come here without taking part in the must-do Jiufen experience, have a bit of good old fashioned tea! Where better than at the most famous teahouse of them all! We headed back to A-Mei Teahouse where we’d made a reservation. We were led to the balcony that overlooked the coastline and the landscape where we enjoyed a small sampling of little snacks along with our own local tea from an authentically prepared set which was constantly boiling beside us. It was a perfect end to the trip, experiencing an old-timey tradition in an old-timey town. 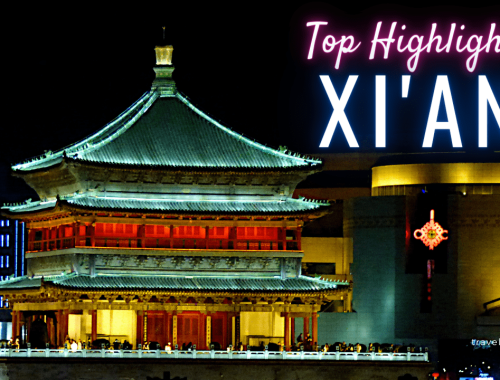 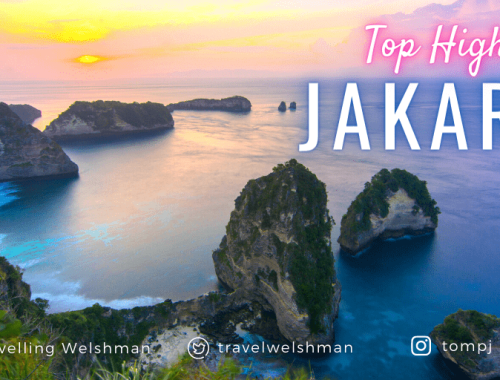 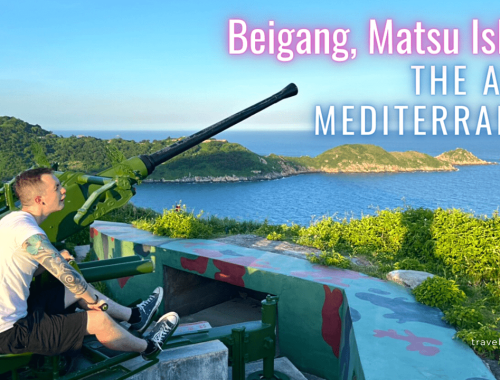