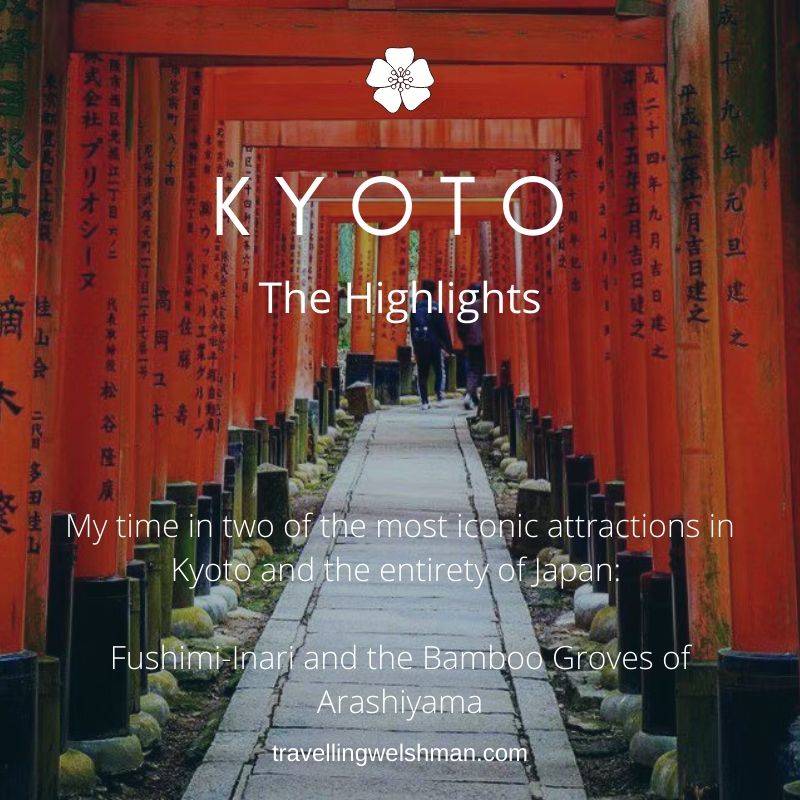 The ancient capital of Kyoto is the home to some of the finest examples of spellbinding attractions, being some of the most gorgeous and serene of any attraction in the country. Two of these stand above all else. Two attractions which are some of the most iconic images Japan has to offer, attracting people from throughout the world to walk amongst the sites unparalleled tranquillity. Those are the gorgeous sites of Fushimi-Inari and the Bamboo Groves of Arashiyama.

During my stay in Kyoto I knew full well these would be the highlights of my time there. Whenever one of my hostel’s guests asked what do you recommend seeing? it would always be these two. After a month of recommendations, it was time for me to see them for myself.

This by far is the most iconic image of Kyoto, if not the entirety of Japan. The photographic haven and spiritual pilgrimage that is Fushimi-Inari has to be on every travellers list. In a country of over 30,000 shrines, this one set the basis for all others that followed it. The site of countless Japanese movies, and understandably so with the fairy-tale like conditions the area exudes. Here you’ll find the endless rows of crimson red torii gates which line up consecutively leading up towards the mountain top.

Before hiking up the mountain itself, I had to pass the temple for which the series of torii gates received its name. Fushimi Inari-taisha Shrine was the original site of worship, where citizens would pray to the gods of rice and sake for a bountiful harvest. As I arrived a line of faithful priests were led within the shrine to continue their daily prayers. The peaceful chorus of chants in the surrounding temples gave a flavour of what was to come.

The seemingly endless rows of enormous torii gates begins behind the original shrine leading up 233 meters along Mount Inari-san. The gates are so great in number (5,000 in-fact) and so repetitive it becomes easy to forget your immediate surroundings, losing yourself in the hypnotic charm of the bright crimson tunnel leading you onward as if to a serene heaven.

One side of each gate is covered in inscriptions, just adding to their mystical beauty. The left with the name of the person(s) who donated the particular gate, and the right with the year of donation. It somehow added to the mystifying appeal of the tunnels, truly making you feel you’re in a place of real significance.

Occasionally there were breaks in the row of gates. These breaks would often include a collection of grave-sites as well as a number of sub-shrines packed tightly in the limited space between the gates continuing path. Faithful and casual worshippers alike would cover these sites with miniature figures of torii gates which were sold by vendors along the route.

One such break in the chain comes at an intersection in the hiking routes about half way up the mountain. From here there’s a break through the thick foliage, allowing for a view back over the south side of Kyoto. On a clear day you’re able to see all the entire expanse of the city, all the way towards the mountains on the opposite side.

The intersection was a blessing. One route up, one route down, which separated and cut down the amount of crowds on each. Naturally such a world famous attraction comes with the accompanying hordes of annoying tourists. People who clog up the walkways and take away the serene spirituality the place should provide. Not to mention those who expect the entire world to hold back as they try to take their ideal instagram post. At times it becomes so busy everyone has to walk in a slow-paced single file. Luckily, further up the mountain you scale the less the crowds become, finally allowing me to truly absorb where I was. Finally losing myself in the mystical fairy-tale walk through the hypnotic crimson tunnel.

At the peak of the mountain was a collection of shrines with a larger one at the centre. A long line of hikers had formed before it awaiting their turn to say their prayers. As this is the shrine to which all others throughout the country has been based upon, naturally the one at the mountains peak is the most significant. It was only right that I would pay my own respects.

It became the site for the final phase of the ritual I had began many months before. Almost a year ago is when I received my tattoo from a Buddhist monk in Chiang Mai. Following the blessing ritual he performed, he gave me a small yellow candle and three sticks of incense. I was told to use these in a temple of my choice, praying for the powers that the tattoo would bring me. One of those sticks was burned back in one of the many temples of Chiang Mai, another in China, and the very last one along with the candle were lit at the peak of the Japanese mountain.

Kyoto is a city full to the brim of photo ops and some of the most famous sites in Japan. Along with Fushimi-Inari, the top contender for the number 1 spot in all of Kyoto would be the bamboo groves. Another iconic site which since its conception has been the focus of countless artists, photographers and poets alike.

In the quiet yet tourist driven district of Arashyiama to the north-west of Kyoto are where the groves are found. Though still within the city limits, its a perfect escape from the sprawl of the streets. A nice change of pace by returning back to nature, much like the nobility of the Heian Period did. A quick series of trains and I arrived at my next adventure.

As I didn’t want to head straight to the highlight, I might as well see something else along the way. Predictably as we were still in Kyoto, there were a number of temples along the way. My temple of choice is considered to be one of the five great Zen temples of Kyoto; Tenryuji Temple. This UNESCO World Heritage Site came with a spectacularly tranquil garden between the temple and the base of the forest filled mountains. It surrounded a central koi filled pond, blending in beautifully with the backdrop of the green hills. It set the right tone for what was to come.

No more time wasting, time to head to the whole reason I’m here. The bamboo forest began just behind the temple which lead to the pathway which carved through the emerald forest. Thick groves of enormous upward stretching bamboo making you feel so insignificant walking amongst them. Much like a little bug walking amongst the blades of grass. The forest is at its finest on a breezy day when the bamboo would wave to the will of the wind as if they were beneath the ocean, releasing a gentle chorus of creaks.

Just like the tunnels of Fushimi-Inari, it could easily be mistaken for a setting in any decent fairy-tale. So easy to lose yourself in the surroundings as you walk through a narrow parting through the sea of waving stems. It quickly becomes clear how this place has been the subject of countless artists and the like for years.

I exercised my patience as yet again such a popular attraction came with it the accompanying hordes of tourists. Arriving mid-afternoon didn’t help. It was impossible to get any decent shot without someone standing in the way, despite my best efforts.

Sadly for me, although it was a utterly spectacular in many ways, in others it was slightly disappointing. The term forest suggests an enormous expanse covering a vast area. Despite first appearances, it was actually only about 200m from one end to the other.  It was short enough that you could see the end from within the path quite comfortably. Not exactly what I expected.

The other problem was due to where I had stayed before arriving in Kyoto. Only a month prior I had spent a week chopping down bamboo in a temple in Agui. The temple had it’s own bamboo forest which wasn’t too much smaller than those of Arashiyama. Having spent such a considerable amount of time getting up close and personal with the spectacular flora, it sadly made the scenes of Arashiyama just a little underwhelming.

Kyoto: A Welshman's Memoir of a Geisha 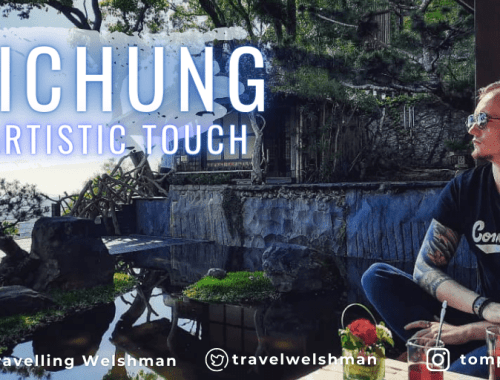 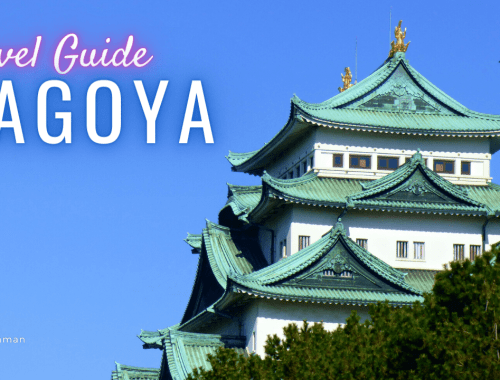 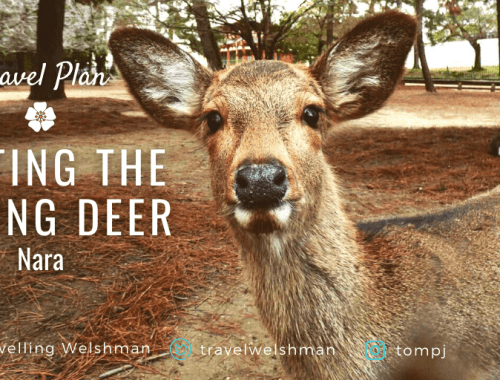 The Ultimate Travel Plan: Visiting the Bowing Deer of Nara