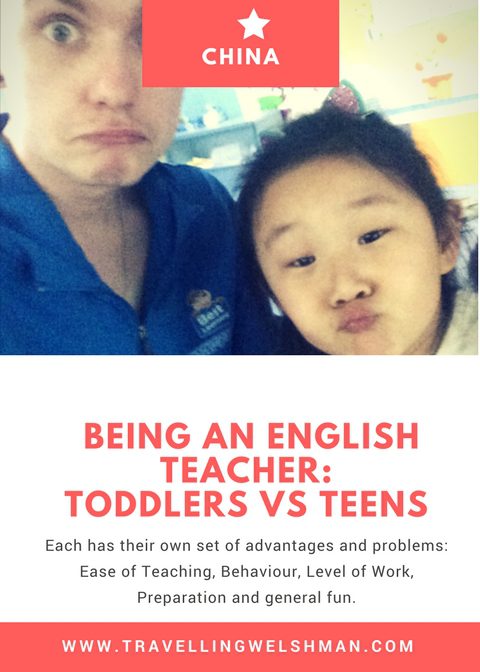 Certainly, I’m not your typical primary or high-school teacher in more ways than one. The biggest difference is rather than exclusively teaching children of one certain age, I teach a broad spectrum. My students range from attitude filled 12-year-old teens to tiny 3-year-old toddlers. The methods and persona used to teach these varying ages of children obviously varies quite considerably. Looking like an idiot isn’t going to work for teens in as much as an hour-long PowerPoint lecture won’t entertain 3-year olds.

For every ESL teacher in a similar situation, they have a preferred method for each class, and in that comes an enjoyment and ease with one over the other. You’ll have your favourite classes as well as those you cant wait to get out of the way. Each age group has their own unique challenges to cope with. Each has their own levels of behaviour, difficulty of work and general fun. This is what they’ll be compared on.

Actually teaching a lesson is quite difficult with toddlers. They’re babies, they simply have a lesser level of understanding, as well as a very restricted vocabulary to try and explain anything. Your explanations have to be incredibly basic which can become tricky with certain words.

Another is trying to define and explain the use of a word where its near impossible to explain to an English speaker! How are you going to define the word “for”  or “to” to a 5-year-old in another language? The only thing you can do in this situation is show examples of how its used and hope that it sinks in.

With kids of this age, the work you’re trying to teach is basic and should be very easy for students to pick up. All the information are things they should know already, you’re just providing the word in another language. It wont take too long to teach a child “A makes Apple” or the names of animals.

Your aims for each lesson are incredibly simple, usually consisting of a few new words and a couple of examples of how they’re used in a sentence. All very repetitive which makes it a hell of a lot easier for the kids to remember.

Without a doubt this is a huge advantage of teaching toddlers, as its way WAY more fun than the older kids. The students will respond to something that is fun and engaging, therefore the same has to be true of you. You quickly learn the more stupid you are in front of the class, the more entertaining you are. This is where gestures and flamboyant use of physical movements are incredibly useful. Not only are they entertaining, but can also become a future reference, where all I’ll have to do as a teacher is repeat a gesture to remind students of a word.  If you don’t entertain these kids, they simply wont listen to you.

The work you’re teaching is also easier to have fun. The majourity is based around activities which are simply games to make the work more fun.

As you’d imagine, a class full of kids can be one hell of a handful to control at the best of times. Sometimes your hyperactive loud demeanour becomes a double edged sword, putting the kids into a frenzy. You also have to remember, they’re just kids…they’re known not to listen, thats what they do best. As much as the Chinese Teacher (CTs) and I attempt to control them, there are just times where they get out of hand.

Despite that, bringing these students under control can be done quite easily, which is down to the system the school uses. A student can earn stars (e.g. for correct answers, participation) and will subsequently lose stars if they aren’t listening or misbehave. Simple yet incredibly effective. The kids really take these stars to heart, as its a display of their accomplishments, and you see the devastation in their eyes as they stare at the empty space where a star once stood. Its so effective even the threat of losing a star is enough to keep them straight.

Considering that the level of work is much simpler, so too are the preparations. Kids of these levels prefer routine, they feel much more comfortable and familiar as the lesson progresses. So much so that I have 3-5 year-olds yelling out the next activity in my class before I’ve had a chance to. They sprint towards the light switch yelling “SING A SONG”.

This means that practically throughout the year you can do pretty much the same routine with new materials every lesson. This familiarity makes it easier on both the teacher and the students. As the school provides all the materials I’d need for a lesson, with one or two things thrown in by myself, its quick and simple. As is their age, most of what they learn will consist of a photo its name underneath e.g. an Elephant

Without a doubt this would have to be the biggest “downfall”; these kids demand such a high level of energy. Kids of this age learn best when an activity is engaging and fun, so standing still in front of class with a mono-tone voice aint gonna cut it. You have to be hyperactive, jump all over the classroom, mime each word with elaborate gestures. If you don’t keep them entertained, they’ll just drift off and all attention lost.

This isn’t to mention in-between your classes. The kids will regularly get given a break where they can watch some TV (more often than not the high-pitched bastard Mickey Mouse) and have their snacks. However more recently my time is now spent further entertaining kids who now run up to me in groups screaming “FLY! FLY!” with their arms in the air. I made the fatal mistake of putting one student on my shoulders and ran around the class…so of course now every single child expects a turn on the 2 meter tall giant.

Needless to say, after a 50-minute session of clown improv, it leaves you drained and lacking a voice. For one particular all-day class lasts from 8am until 4:30pm, which if it wasn’t for the blessed 2-hour nap in-between, I’d collapse with exhaustion.

When it comes to teaching a new concept, its much easier with the older learners. They have a wider range of vocabulary and understanding, meaning it takes much less effort to explain something. At this level you don’t have to be as aware of the language you use. With toddlers, you’re walking on egg shells, using a limit number of words you know they understand to try and explain. Teens are able to hold a conversation, therefore easier to discuss the use of the new language.

This is where it becomes a negative to teach the teens, as the work is much harder and more in-depth. Often times you’ll find you’re teaching things even you don’t completely understand. Sometimes you’ll even question why the hell you’re teaching this to the kids? Do these Chinese kids really need to know about the Gold Rush or the Great Depression?

As the work is more in-depth, so must your research be. The materials the school provide don’t really explain the concepts, its left for you to fill in the gaps. Most of this is what your lesson plan suggests, which you come to the conclusion its bullshit, they don’t need to know it. In that case you have to construct your own lesson with accompanying materials. In one class I’ve completely removed a subject and started teaching biology, simply as that’s what the students wanted.

They’re just not as fun honestly. They’re much less interested and what’s more at this age, they have a more independent realisation of “I don’t have to do this if I don’t want to”. The much simpler activities are incredibly fun for toddlers, but stupid for teens. Activities become more difficult to make and get the students engaged. It becomes more like your regular boring high-school class, where you just sit, listen and write.

The topics which are being taught are made more difficult to be “fun” to teach. They’re based more on correct grammar or looking at the English language in more detail. “Today kids we’re going to learn about the differences between “might have” and “could have”, YAAAAAY!”.

Its unfair to label teens as more or even less trouble than toddlers, they’re just a different type of difficult, with different issues to contend with. Firstly, they’re at the age where they realise they have no real obligation to listen to you, you’re not the boss of them. So too comes the difficulty of trying to punish the student if they’ve misbehaved or don’t listen. With the toddles its easy, the threat of loosing a star is devastating to them, but a teenager won’t give a shit about a pointless star. Shout at them all you like, it isn’t going to make them care. Thankfully however there is one very strong threat that always works, particularly to these Chinese students; threatening to have a talk with their very strict and demanding parents. Enough to send shivers down any poor Chinese kid.

Another problem I didn’t expect to deal with is mobile phones in the classroom, now I appreciate my previous teachers’ grievances. It is quite irritating trying to teach something and you see someone’s head down. Particularly if in 5 minutes they’re going to say that they don’t understand. Homework’s have also become a new annoyance, which simply won’t be done, like any other self-respecting teenager.

As is the level of work, it requires much more preparation which could take a considerable amount of time. The students will fly through the work and simply loose interest if you repeatedly try to explain something they already know to fill in time. This means you yourself will have to provide more work/information to keep them engaged.

Also as a considerable amount of the lesson plan is removed, I have to fill the void myself. I have to decide what these kids should learn, how they should learn it, and provide all the materials myself. All of which takes up a lot of time.

Teens are in no way as exhausting as the toddlers, frankly much easier on the heart-rate. The work needs much less explanation, and thankfully the clown act can be dropped as it doesn’t work with teens. There’s much less student-teacher interaction, as a lot of the work is left up to them. Most of the class will be spent completing worksheets. it can be quite an easy session.

As I said at the start, all teachers will have their preferred classes, ones they just enjoy much more than others; I’m no different. Without doubt i prefer to teach the younger learners, simply because of the enjoyment you get out of it. I can become a big kid myself, playing games and singing songs throughout the class. I unleash my caffeine raged hyperactive performance to the screaming of the enthusiastic teacher. Compared to being the teacher stood in front of class reciting work im not interested in, much like high-school teachers, isn’t as fun. 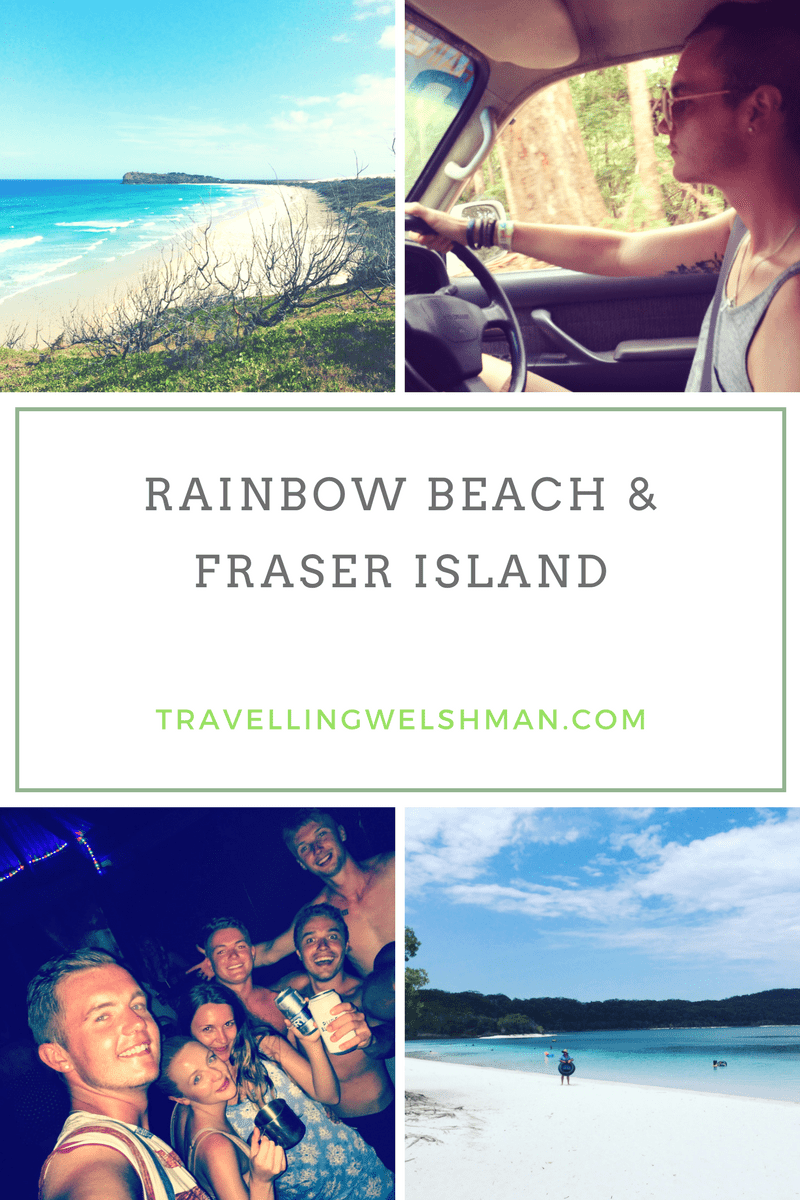 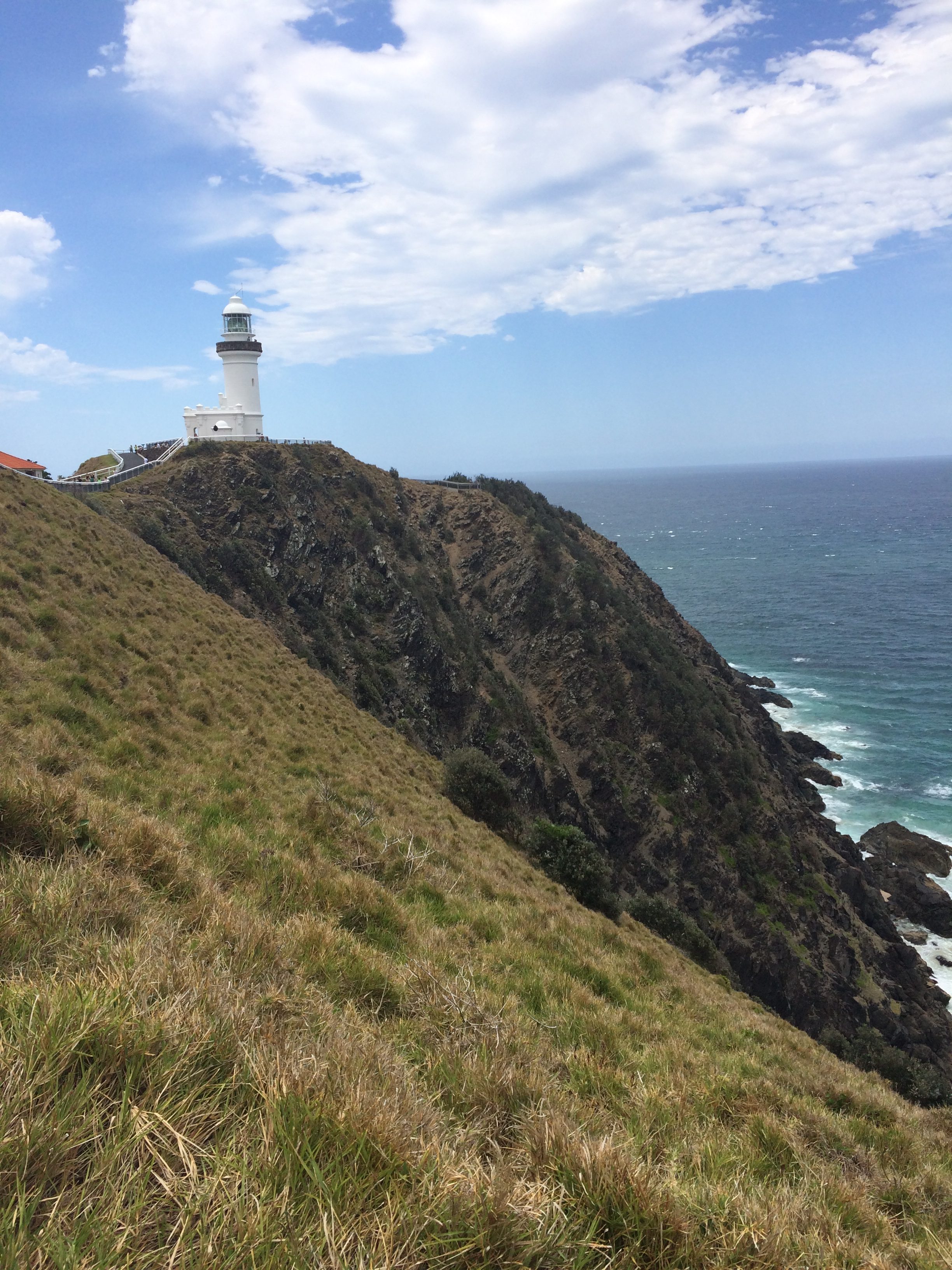