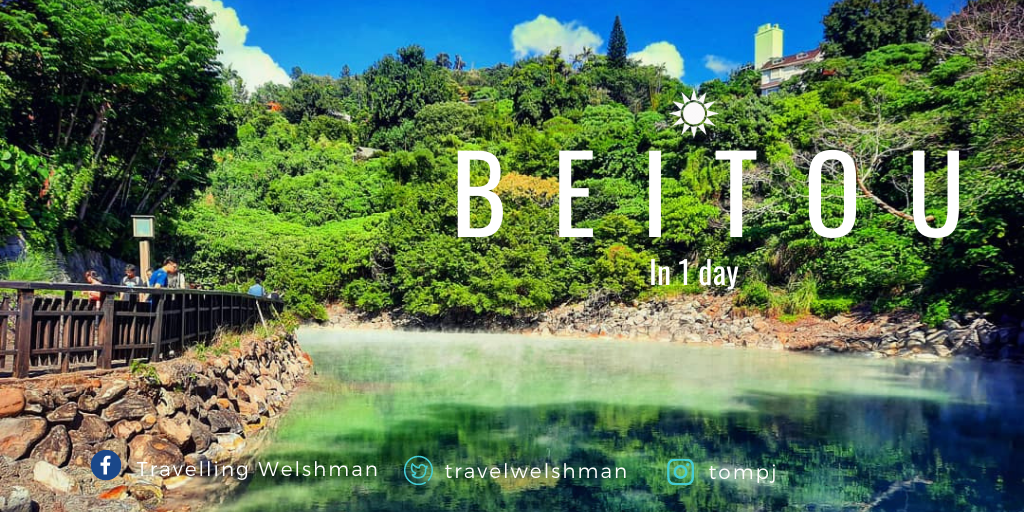 Taipei is a city with some incredible variety throughout its far reaching districts. However, only one area has had the privilege of hosting Taiwan’s movie industry elite, Japanese geishas and considered the home of Taiwan’s hot spring culture. The district is Beitou, one that exudes incomparable charm while being both historically and cultural significance. Along with being smack in the centre of a geological hot-spot, it makes for a perfect day trip from Taipei. So here’s the perfect itinerary for getting the most out of Beitou.

Beitou is the northernmost of Taipei City’s 12 districts, in an area of significant geological activity. The entire district is in the middle of the Tatun Volcanoes which are spread across the northern end of Taiwan. Though they are no longer active, studies have shown that there are probably magma chambers still beneath the surface. This easily explains why there are so many hot springs in the area!

How to Get There

From the centre of Taipei there’s only one way to get to Beitou, and it couldn’t be simpler. First, take the subway along the Tamsui-Xinyi (Red) Line to Beitou Station, then transfer to the Xinbeitou (Pink) Line to the terminal station one stop over at Xinbeitou Station.

There are a range of attractions to include on your Beitou itinerary. From cultural and historical spots to natural wonders, there’s something for everyone! Luckily, all the attractions are within a comfortable walking distance of each other, and essentially follow a single street.

Inside the historic station

The first stop of your Beitou itinerary brings you to the same place many thousands of other visitors first arrived at many years ago. The traditional wooden station once connected the district to the centre of Taipei. It was built in 1916 with the express purpose of bringing tourists to enjoy the local hot springs and regular festivals. These days the former station holds exhibits detailing the stations history, though there’s little English. Despite that, it’s still a quirky look into what Beitou would have looked like for the arriving tourists 100 years ago.

The craft market outside the station

The line finally shut down in 1988 when the Taipei Metro station was being built directly next to it. After it was disassembled and moved, locals soon campaigned for its return due to its historical importance. It was promptly shipped back and rebuilt near the original site. Be sure to check out the quaint little craft market beside the station as well as the free hand-soaking hot spring!

Your next stop is just a quick walk down the road.

There are a total of three free foot-soaking hot springs in Beitou. They’re found in Quanyuan Park, Sulfer Valley and Fuxing Park, the latter of which is your next stop! It’s a “green sulfur” pool, known for its jade-green water, and said to be effective in treating chronic skin diseases, aching muscles, and promoting metabolism. Each foot-soaking pool is open from 8 am – 6 pm, except for Mondays.

Walk back towards the MRT station then head straight along the street to your next stop.

Taiwan is home to a number of indigenous tribes that have inhabited the island for many centuries before the arrival of the Chinese. The Ketagalan Culture Center became the first place that showcased and taught people about the nation’s indigenous peoples. The museum introduces a total of 14 different Pingpu indigenous tribes (including the now extinct north Taiwanese Ketagalan tribe) through exhibits of various cultural, historical and spiritual artefacts. The free museum gives visitors a deeper understanding of not only Taiwanese aboriginals, but also the history of Austronesian people. The museums exhibits also showcases the early interaction of these tribes with the outside world, such as the early Chinese settlers and the European colonists.

Its so close you can see it! Keep walking down the road. 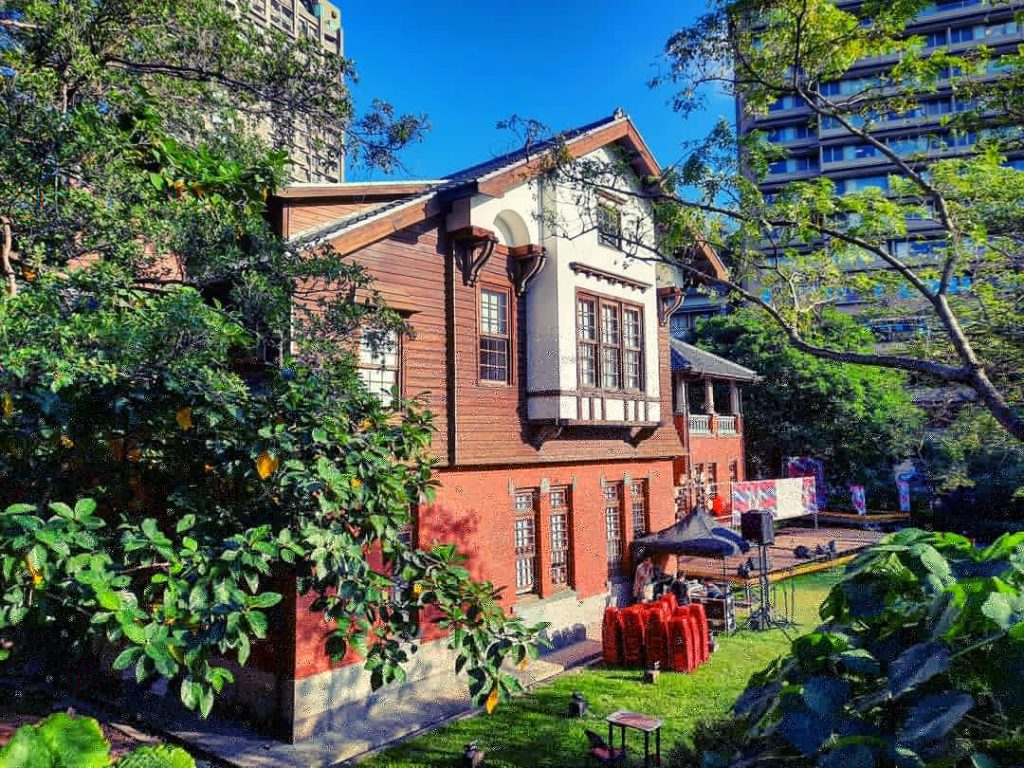 If Beitou is known for one thing, its hot springs. Thus, the Hot Spring Museum has become a symbol of Beitou’s nationally renowned culture. The district’s flourishing industry attracted society’s elite. Centuries ago, rickshaws would drop off Japanese geishas, and the arrival of hot spring hotels set the stage for Taiwan’s booming film industry of the 1960s and 70s, turning Beitou into the Hollywood of Taiwan.

The bathing pool at the bathhouse

The Beitou Public Bathhouse was built in 1913 by the Japanese colonials, becoming the biggest bathhouse in East Asia at the time. After World War II, and the release of Taiwan from Japanese rule, it was sadly abandoned. In 1994, a group of teachers and students from Beitou Elementary School found the deserted bathhouse on a field trip and petitioned for its conservation. The bathhouse finally became a Municipal Monument in 1997, and was opened to the public as a museum in 1998.

It’s directly next to the museum, so just follow the road again!

As you’re in the hot spring capital of Taiwan, at least one stop on your Beitou itinerary should be spent in one! The most popular choice (and the cheapest) is the “Millennium Hot Spring”, or the Beitou Public Hot Spring. The 1000m-square open-air complex includes three hot pools ranging from warm to boiling and two freezing ones.

We’ll take a short detour off the path, but an important one. Keep following the road and fork left. 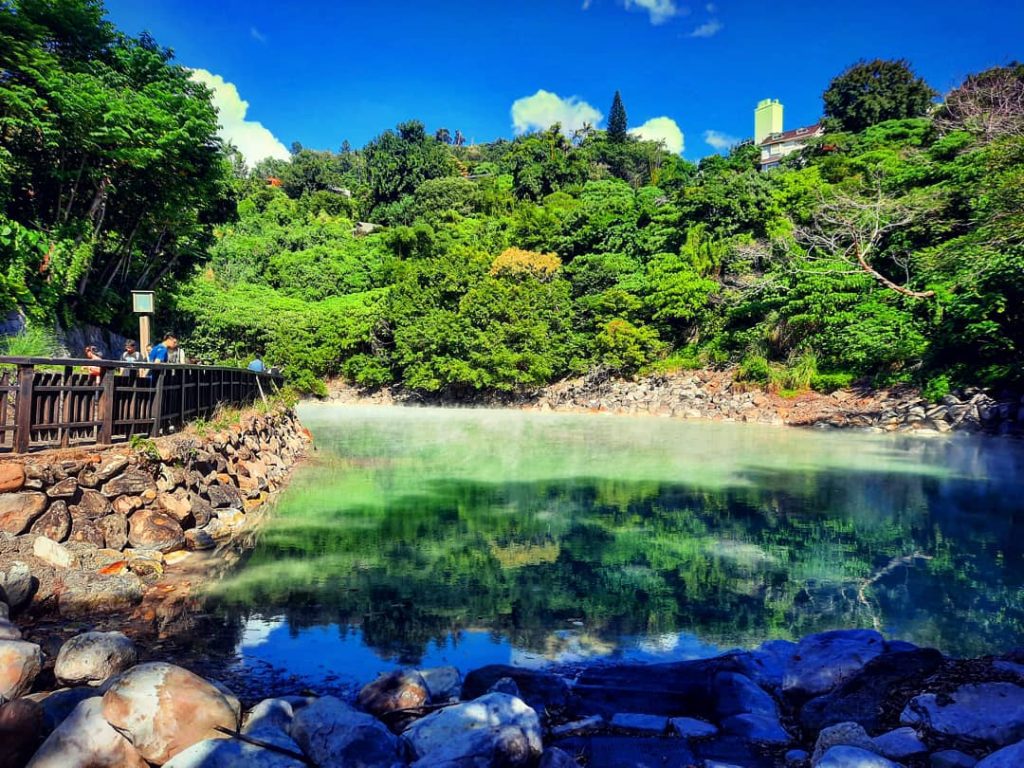 The Japanese colonials once considered the scenes in the Thermal Valley as one of the “12 great sights of Taiwan”. Without a doubt, it will be the biggest highlight on your Beitou itinerary. Thermal Valley is a jade-green sulfuric pool which supplies the districts hot springs. A blanket of sulfuric steam consistently rises from the valley and follows the will of the wind, giving the area a truly eerie quality, like a witch’s cauldron! It’s little wonder the area has earned nicknames such as “Ghost Lake.”

The temperature of the sodium carbonate springs range from 80-100℃, and can even be corrosive. Visitors were once allowed to boil eggs in the so-called “green sulfur springs”, though its now banned. This is not only to protect the spring itself, but also avoid clumsy tourists getting scolded. 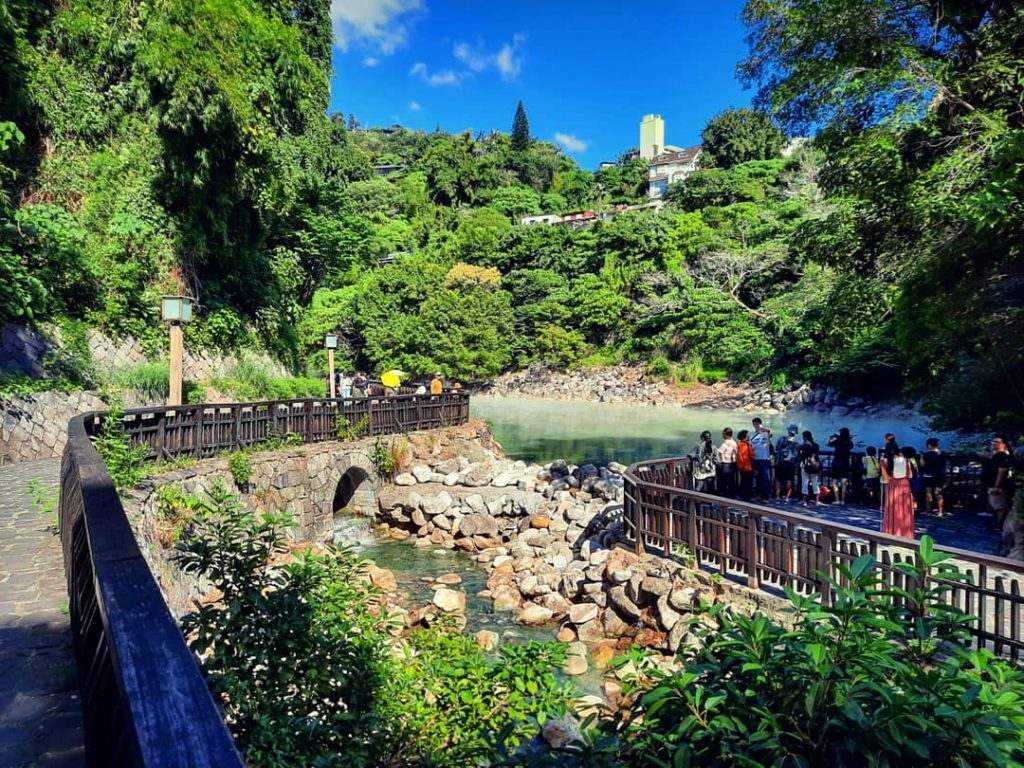 Thermal valley is also home to an incredibly rare mineral which is only found here (and one spot in Japan), Hokutolite. Otherwise known as “Beitou rocks”, the mineral is produced when the green sulfur hot spring water passes over lands of the Beitou Creek. After many years, it creates a mineral which is radioactive as it contains a radium! The area looks like the perfect place for a superhero origin story!

Head back to the road you were following and keep going uphill. A set of steps separates right at a stone marker and a small wooden Japanese gate. Follow the steps to the temple.

The main hall of Puji Temple

Puji Temple is one of the few surviving Japanese-era Buddhist temples in Taiwan. Also known as Tesshin-in, it was built in 1905 with donations from railway workers. Today, the wooden temple is a dedication to Guanyin, who locals think of as the spirit of the hot springs. To this day, traditional Japanese-style worship ceremonies are performed regularly in the grounds of the temple.

The walk is about to get tougher. Luckily, you just need to follow the road all the way to the end as it winds up the mountain. Trust me, its worth it in the end! 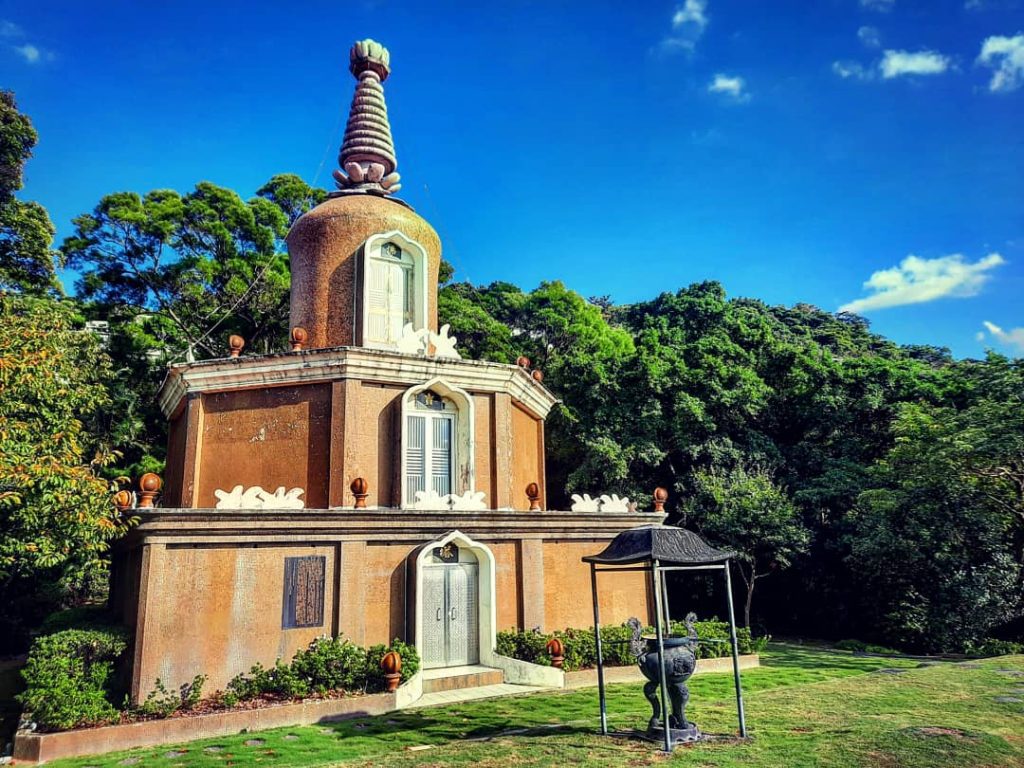 The modest shrine of Shanguang Temple

The last stop on your Beitou itinerary brings you to the end of a long winding road which leads up one of the many mountains that engulfs the district. Though Shanguang Temple may appear rather simple, its the view that makes it worthwhile. It provides a fantastic view back over Beitou and the surrounding landscape. People also flock to the temple to see the cherry blossom each year, and has become a top spot.

The view of Beitou from the temple