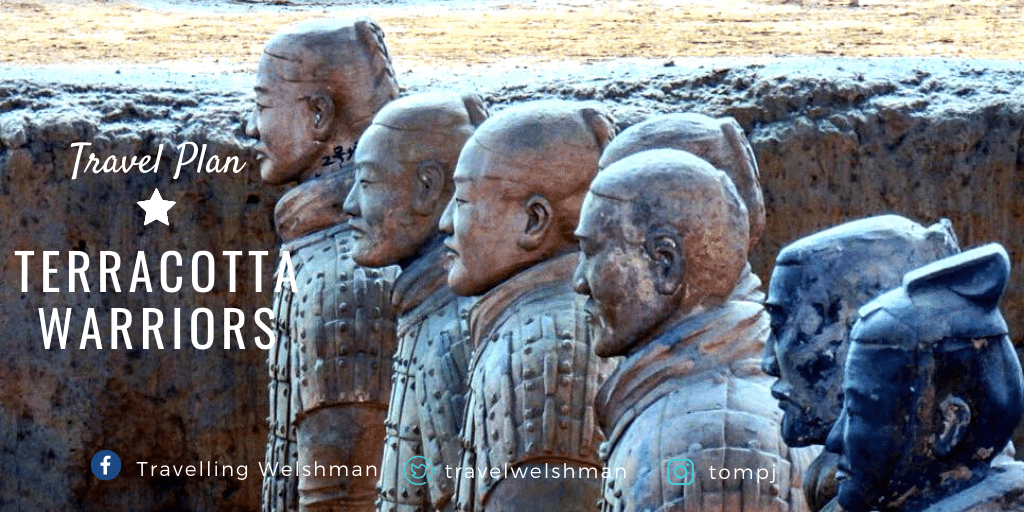 The Terracotta Warriors are one of the most significant archaeological excavations in human history and is rightly considered one of the most incredible and best-known attractions in China. The UNESCO World Heritage Site is a large collection of life-size sculptures organised in battle formations which represent the members of the imperial guard which protected Emperor Qin Shi Huang, the first emperor of the first unified dynasty of Imperial China. Visitors from every corner of the globe come to witness the awe-inspiring scenes within the excavation pits. It’s easily one of China’s greatest highlights, so here’s everything you need to know about visiting the Terracotta Warriors.

Qin Shi Huang (260-210 BC) began as the ruler of the Qin state before conquering all the other kingdoms of China and unifying the country. Emperor Qin was a pioneer in many ways. Not only did he standardize the Chinese language, currency, and measurements, but he also developed economic and social reform, as well as combining separate sections of defensive walls which became known as the Great Wall. 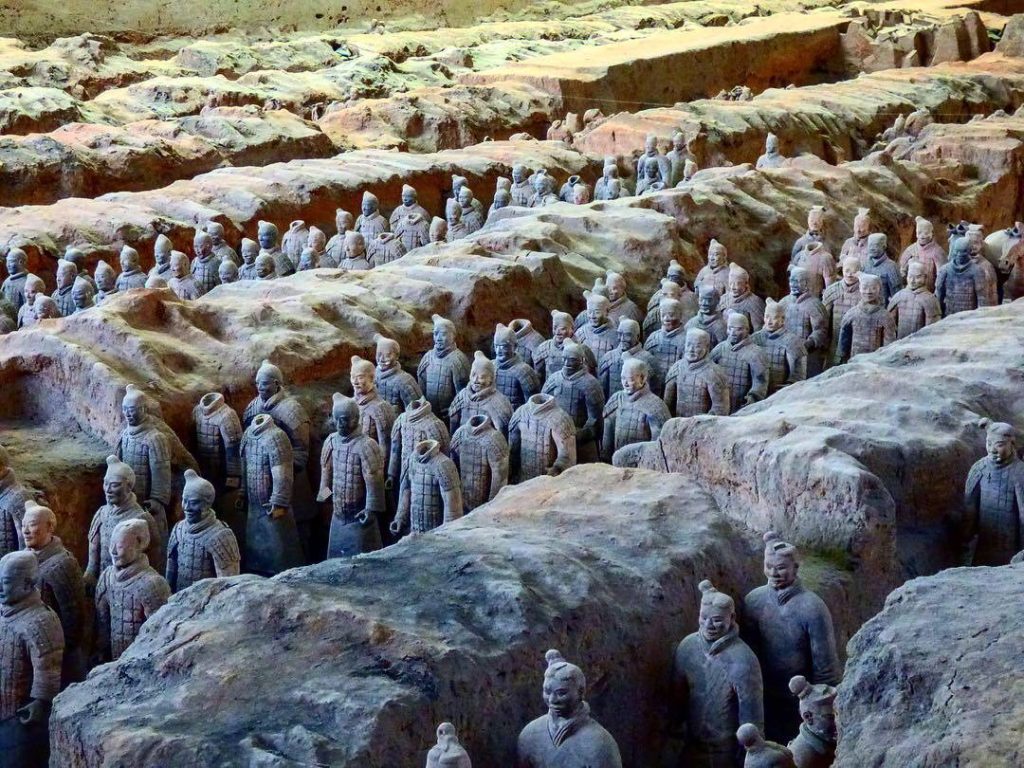 The warriors in battle formation

Similar to rulers before him, Emperor Qin took his afterlife very seriously. He began working on his funeral site (necropolis) immediately after coming to power. It became the size of an entire city, and took more than 700,000 workers to finish. The site was modelled after the Qin capital Xianyang, which included palaces and, according to legend, rivers of pure mercury. The Emperor’s tomb was placed directly in the centre of the necropolis, protected and encircled by an army of clay warriors.

Workers digging a well outside the centre of Xi’an in 1974 came stumbled across one of the greatest archaeological discoveries in history: a life-size clay soldier ready for battle. Government archaeologists were sent to the site, where they found not one, but thousands of clay soldiers. Each figure had unique facial expressions and positioned according to rank. Today, these discoveries are on display to the millions of tourists both local and foreign that come to visit every year.

The collective term Terracotta Warriors now represents a set of excavated sites within the 5 mile wide necropolis. The main sites are split into 2 distinct areas; the Museum of Qin Terracotta Warriors and Horses and the Qin Shi Huang Mausoleum. A shuttle bus regularly travel between the different sites.

The Terracotta Warriors are a part of an elaborate mausoleum that includes around 9,000 soldiers, 130 chariots, 520 horses and 150 cavalries made of baked clay (terracotta) standing in underground corridors. They were created to accompany Emperor Qin Shi Huang into the afterlife. 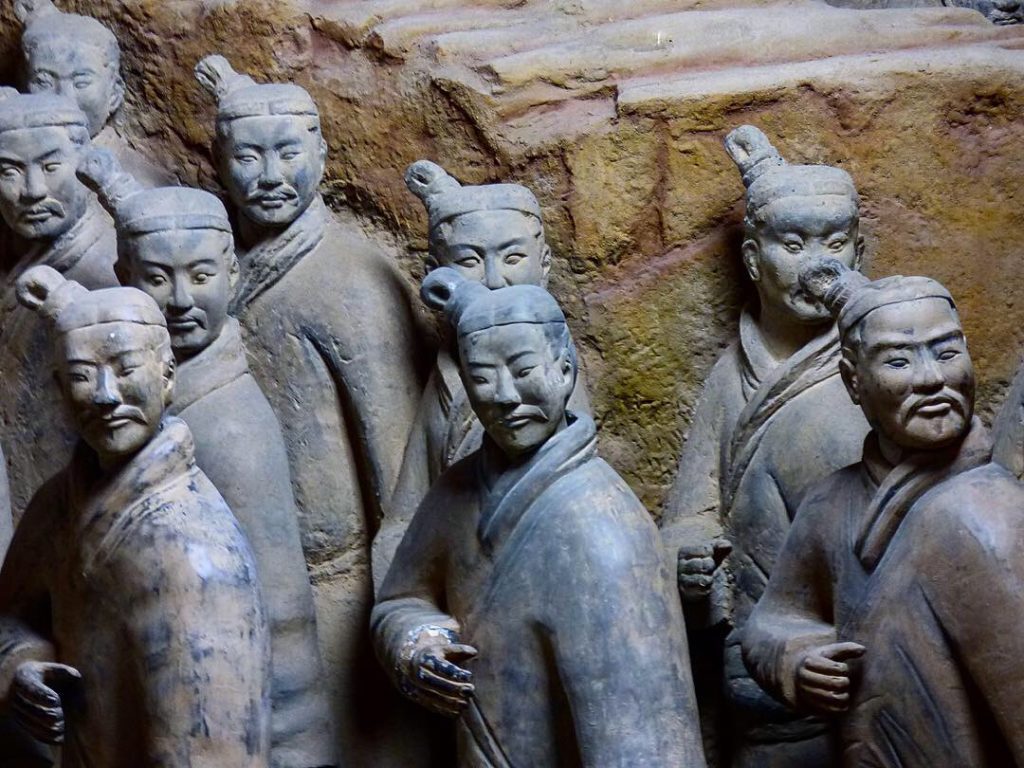 The unique faces of the Terracotta warriors

The museum contains 3 pits numbered in order of their discovery. Each pit is full of hundreds and thousands of warriors, each with completely unique features. The figures each have different hair styles, clothing and even facial expressions, which many believe represent real life warriors. Some are completely unarmed, which are only the bravest warriors or higher-ranked officers.

Not only is it the largest of the three at 230 meters long, but its easily the most impressive and visually spectacular.  Enormous rows of between 1,000 – 2,000 infantry, cavalry, archers and war chariots are set-up in battle formations. Each column is separated by fortified walls made up of wooden beams and reeds. Beneath the warriors are bricks that were once colourfully decorated and engraved with different characters. 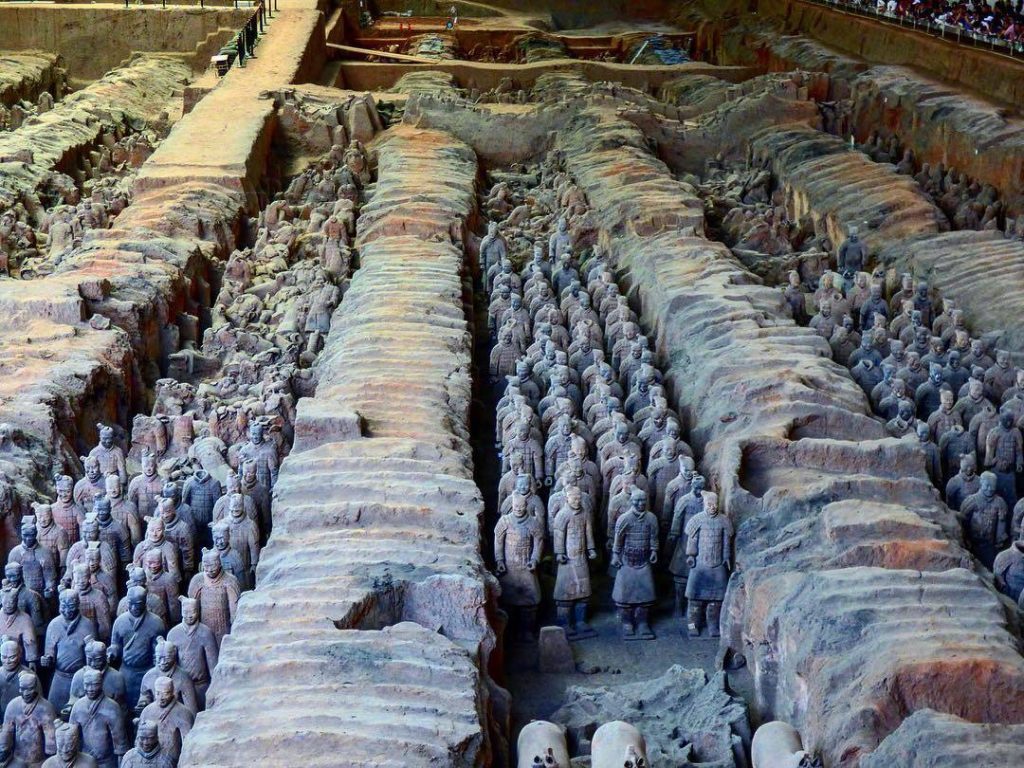 Though its the second-largest and has a more complete collection of warriors, its nowhere near as visually spectacular. Only part of the L-shaped pit has been fully excavated, and appears mostly empty, with most of the remaining 1,000 warriors and horses in pieces. Despite that some would argue that its more fascinating than the rest. Some of the warriors are in more complex battle formations and include a large array of infantry, cavalry and chariots.

It might be the smallest of the three, but its the only pit which has been fully excavated. Its also one of the most important, as its the command post for all other pits. The pit can be divided into three parts: chariot and horse chamber, northern wing room, and southern wing room. The northern wing would have been used to pray for victory and the southern end for discussing military tactics. 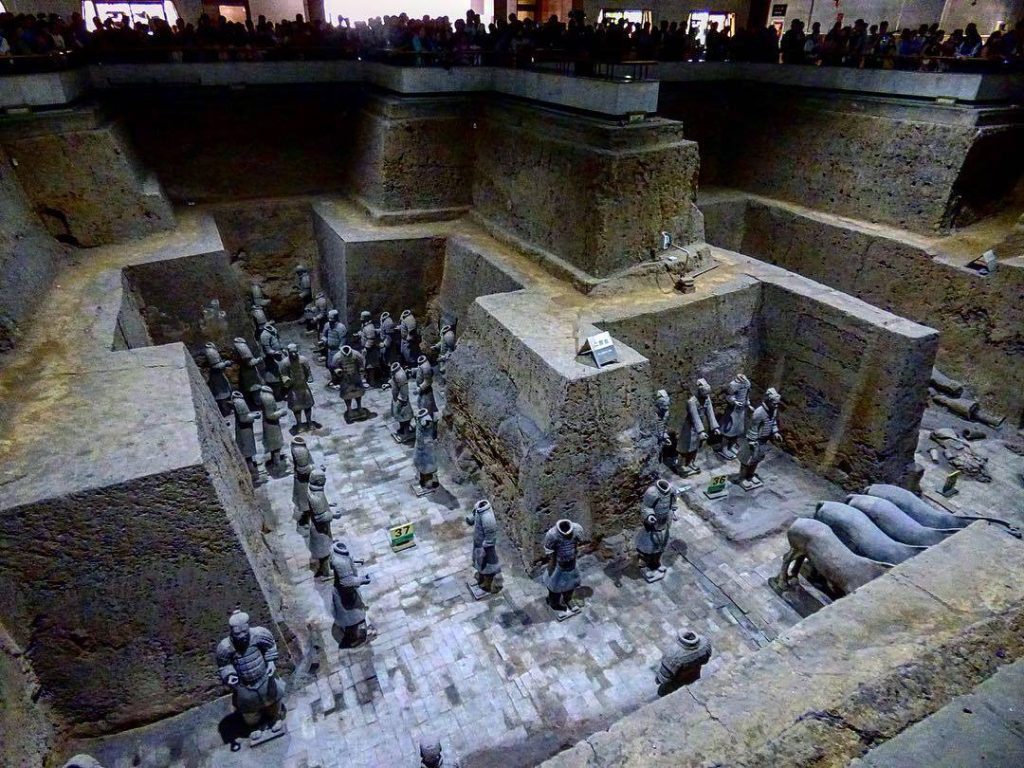 The ominous statues of Pit 3

Relics are still being found in the area, and there’s no better proof than at Lishan Garden. Opened to the public in 2010, its home to possibly the most important discovery of all, the Mausoleum of Emperor Qin Shi Huang. It was found beside other major sites, such as the ritual sacrifice pits, the Museum of Terracotta Acrobatics, Museum of Terracotta Civil Officials, Museum of Stone Armor and Museum of Bronze Chariot and Horse.

Despite its discovery, Qin Shi Huang’s tomb remains unexcavated, and most likely will remain that way. The park’s curator explained it was for protection and respect. He hopes that future technology will allow us to see the contents of the tomb without disturbing the sleeping souls within. Even greater treasures may be hiding within! Ancient texts describe palaces filled with precious stones, and rivers of pure mercury which flow through mountains of bronze. Though such pirate treasure may sound too good to be true, there could be some truth to it. Modern day tests on the tomb show high concentrations of mercury, giving credence to the ancient tales.

It depends on two things; weather and crowds. Despite it being an indoor museum, the weather in Xi’an can get quite intense one each end of the scale. From March – May or September – October is the the most comfortable times of the year. Its worth knowing that from mid-November to mid-March is the low season, when both the crowds are at their thinnest and the tickets are the cheapest.

Xi'an
Xi’an is a city with immense history, stretching back to the birthplace of ancient Chinese civilisation. As well as being the former imperial capital for successions of emperors and dynasty’s, the city became the terminal end of the Silk Road, bringing with it influence from the Middle East. ..

Do NOT ever go during national holidays. This is not a recommendation, it’s a promise of a miserable time. National holidays is when the entire nation of China travels. Thus, every attraction in the country is absolutely swarmed with people. Its even worse at the Terracotta Warriors. The narrow walkways that encircle the pits become clogged with bodies until its near impossible to move. You literally have fight and claw your way past fragile grandmas and bratty kids just for a better view. Even then you’re unable to fully immerse yourself in what you are seeing as you’re pushed and barged at every point.

Located in Shaanxi Province in north-western China, Xi’an has become a major transport hub for the North of China. Both the airport and the city’s train stations has become majour stops for travelling cross-country. The city is even accessible internationally. So first things first, get to Xi’an!

Xi’an has an airport which links efficiently to the rest of the country as well as having a few limited lines internationally. 62 airline companies run 313 lines across the country, as well as connecting to some major cities across Asia and a few capitals in Europe.

Xi’an has become the home of the fourth busiest railway station in China, and is considered the “Gateway to the West”. The city’s many stations play a vital role in the Chinese railway system as it acts as the crossroads for six railway lines that spread widely across the country from Beijing to Tibet.

Xi’an has the second largest highway transportation hub in China, with a total of 7 large long-distance bus stations throughout the city as well as a number of smaller ones. Typically buses in the same station head towards the same direction.

Step 2) Get to the Terracotta Warriors

Secondly, you need to get to warriors themselves. The easiest way to get there is from Xi’an Railway Station where a number of public buses run routes towards the warriors. The bus numbers include 307, 914, 915, and Lintong 826. However, your best option is taking Tourist Bus Line 5 (Bus 306) which stops along a number of attractions such as Huaqing Pool. Each bus will have a numbered sign next to it and usually has the destinations it will visit written on the side of the bus. It costs between 2-5 CNY and runs every 5 minutes and takes about an hour. 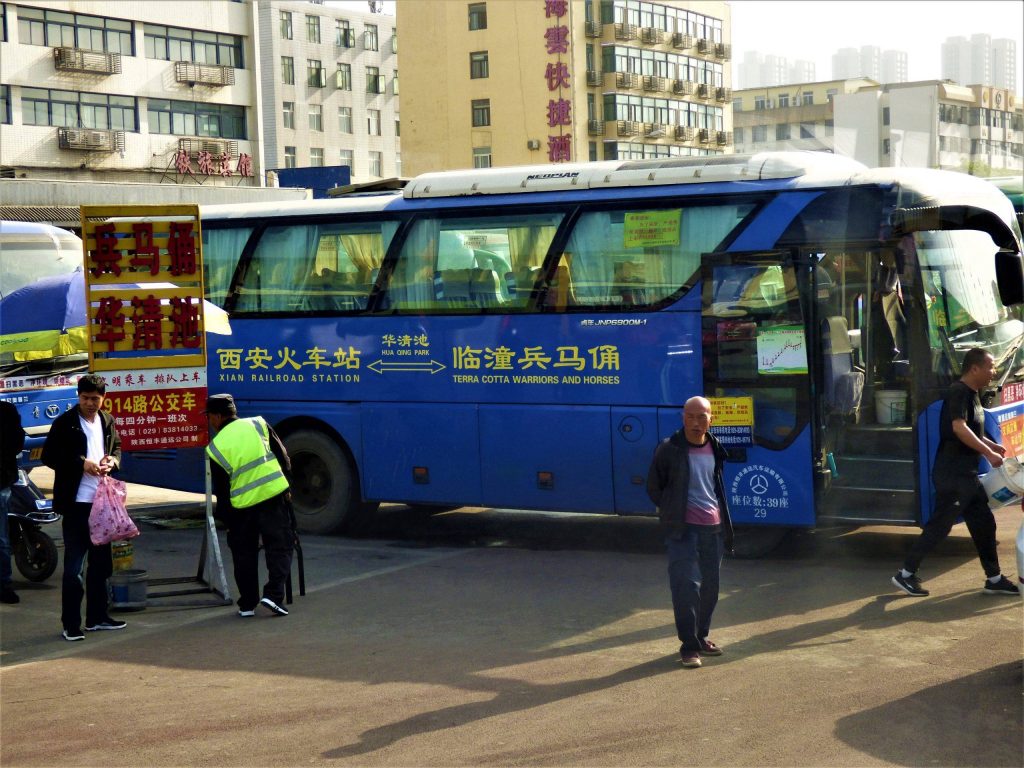 Tourist bus (number 914) towards the warriors

Be wary of people offering to take you on tourist buses, its best to avoid them. The buses are unofficial, thus it will likely be more expensive. If you prefer to avoid buses, your only other option is taxis. However, this is probably  not the best choice as you’ll almost definitely be ripped off, again.