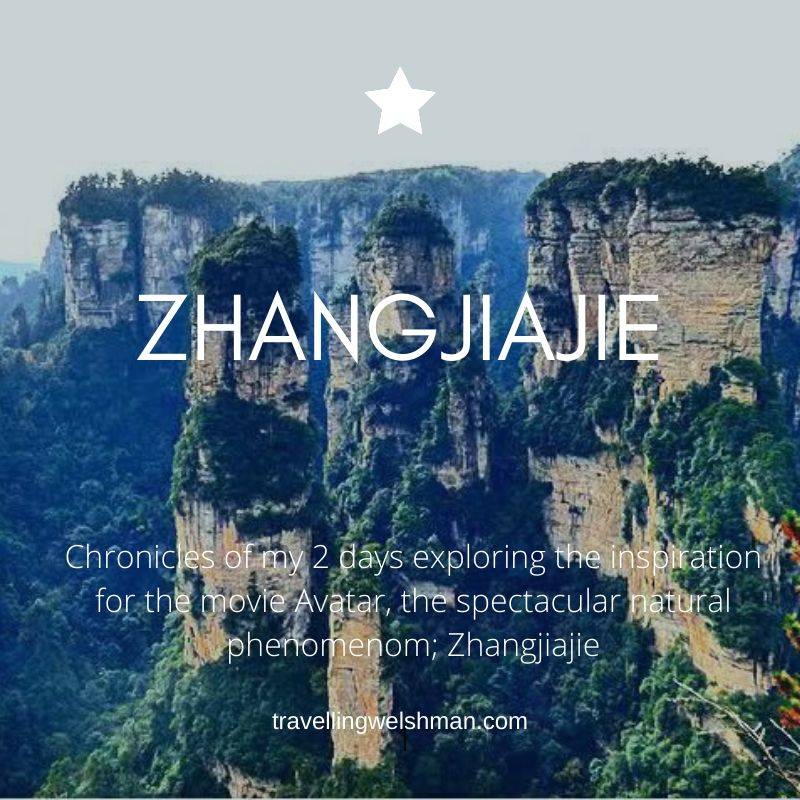 This must be the most world recognized natural phenomenon China has to offer, a true natural wonder of the world. An image of another primeval world, a time of long forgotten mystery. A location which has been forever immortalized in the blockbuster movie Avatar. Somewhere which humbles anyone lucky enough to roam amongst its sandstone pillars and allows them to understand why this is considered such a spiritual place. Welcome to Zhangjiajie.

What better way to begin an around the world journey than with a 24-hour train journey? To ease the experience, I treated myself to a claustrophobic yet cosy sleeper, allowing me to sleep off a vicious hangover from my farewell party. The train pulled early in the afternoon, now it was a matter of getting to my hotel. Weeks before, I was confident I could find the ideal place as close to the national park as possible without breaking the bank. Luckily, I’d found one right on the doorstep to the parks entrance, for a paltry sum of 100 RMB.

So how to get there? First, I’d have to jump on a tourist bus which headed towards various destinations throughout the national park. Unfortunately, there seemed to be hundred of options. Luckily, I used my finest Chinese to work out which of the 17 RMB buses I needed to take me right into the heart of the park. From here I just had to jump on a scenic bus to finally get to the hotel. Unfortunately, I couldn’t tell where I was supposed to get that particular bus or what it looked like…until it passed me. A 20 minute walk with a 30-kilos worth of bags later, and I arrived at my little slice of paradise.

From here I wasted no time. By now it was 3:30pm, and with some daylight left I wanted to make the most of my time. I paid the quite expensive sum of 188RMB for a 4-day ticket, even though I’d only get 2 out of it. A quick ride on a tourist bus took me to the base of the Yangjiajie cable car. Rather than taking it, I opted to walk, thinking it would be more authentic and rewarding. The host at the hotel assured me it would only take an hour or so on the short route.

How quickly I forgot how I loath trekking. Of course I adore being in the surroundings, soaking in the nature, every noise, every smell. What I don’t enjoy are my lungs collapsing and my heart imploding in my chest. If every trek headed down-hill, I’d be happy.

I spent a good sweat-ridden hour or so hurriedly trekking up between the up-reaching sandstone pillars to a chorus of curious monkeys rustling the near-by trees. By the time I reached the peak of the trail it was 5pm, the sun was about to set. I had a few options to get back to the hotel: 1) return the way I came 2) pay for the cable car down 3) take the longer more scenic route. Regrettably, I chose the latter.

Don’t get me wrong, initially it was a fantastic decision. I was gifted with the most extraordinary views as the sun bathed the sandstone pillars in an unmistakably Chinese red glow as the sun set over the misty mountains in the distance. Stunning awe-inspiring scenery which couldn’t simply be rushed past.

However, 30 minutes into a 3-hour trail, the sun had set, and plunged the valleys into total darkness. No longer could I appreciate where I was in that moment as I couldn’t see a fucking thing. I had to scale the steep cliff faces with only my phone’s torch to guide me. The situation wasn’t helped by frequent tree-rustling, unidentifiable croaks and the bark of distant dogs.

Up bright and early without a moment to lose, I headed back to where my expedition started the day before. In order to get further into the park I’d have to reach the same point I had yesterday. With limited time and a lot to see, I opted to pay the 61 RMB fee for the cable-car.

From here I’d hop on the first of a series of free tourist buses which took you to various hot-spots around the park. Looking upon a map you’ll find there are seemingly hundreds of viewpoints and places of interests throughout. Each has their own comically translated names which I’m sure sounds much better in Chinese.

The first point which we were dropped off, and everything I had seen the day before are held under the banner of Yangjiajie. This would be the highlight of the park and where you’ll find the biggest hordes of tourists. A well maintained walkway winds its way along the cliff edges and between the pillars. With regular viewpoints and decks places all along, it provides utterly bewildering views across the valleys and surrounding mountain ranges. There are more then enough opportunities to stop and stare in total fascination.

One attraction is known as the Greatest Natural Bridge (or the First Natural Bridge). It can easily be recognised with countless numbers of locks placed along its barriers accompanied by a stream of red ribbons. This natural bridge spans across the cliff’s edge from the “mainland” onto one sandstone pillar, with a few hundred meter stomach-churning drop below.

Continuing along the incredibly picturesque and fairy-tale like route brings you to the biggest highlight of the entire park, certainly the most famous. The image that the National Park is known for, a landscape recognised worldwide and unlike any other. These are the Heaven Pillars, although in recent years they have become known under a different name; the Avatar Mountains.

Taking the time to gaze at the spectacular natural formations you begin to understand how a man like James Cameron could be inspired by such a place. You begin to understand how he could possibly dream up such spell-binding magical scenery. Quite frankly, the scenery at this point in the park is greater than any science-fiction could ever dream up.

These mountains sadly are not inhabited by fictional blue creatures, rather something much more familiar and a personal arse-clencher of mine; monkeys. Predictably these ingenious little fellows have worked out with tourists comes opportunities to eat, so they’ll be found in force around the hot-spots.

Personally, I’m not very comfortable in the company of monkeys. Ever since my first real experience with them in the monkey forests of Bali, I’ve always been on edge around them. They’re unpredictable, deceptive little thieves that can turn in a second, launch at your face and bite with a set of terrifyingly large teeth for an animal its size. Also not having a rabies shot keeps me wary.

Although I kept a respectable distance, others didn’t as much. Hordes of Chinese tourists would crowd around a helpless little creature, sticking cameras an inch away from their faces and teasing them with food. These are the type of people who deserve to get bitten in my eyes.

Continuing along the route took me to the Enchanting Terrace, which gave a wider panoramic view of the near and distant landscapes, and how they seamlessly meshed together. I would have loved to spend an entire day staring in wonderment at each and every pillar and crevice that surrounded the park, sadly my time was limited. With a train to catch later that day I had no time to shilly-shally, so back on the tourist bus I went.

This time I was headed to the peak of the mountains, another area many people start their Zhangjiajie exploration; Tianzi Mountain. For me, it was just an opportunity to sit back on a bus and soak in the surroundings as they passed. That’s what I hoped for, however I had forgotten about a particular frustrating habit of some travellers.

Instead of marvelling in fascination at the extraordinary surroundings around them, something they couldn’t be able to see anywhere else in the world, some decide to close the curtains. I can not for the life of my understand how anyone can do that. You have one of the most spectacular natural wonders of the world right outside the window, and you close the curtains?! Fair enough if you want to waste your precious opportunity to experience it, don’t fucking waste mine!

The bus systems in the national park were very crafty. Sometimes they wouldn’t take you all the way from A to B. Rather they’d drop you at one end of; let’s say a road of restaurants and nick-nack stores, where you can grab another bus on the other side of the road. To be fair the food isn’t too outrageously priced, and really you’re just paying for the view you get to dine with.

The peak of Tianzi Mountain didn’t provide views quite as spectacular as those of the Heaven Pillars, rather it was just the dropping off point for the cable car. However it was the highest peak of the surrounding ranges and did allow an opportunity to look back over the valleys.

My time had come. A series of buses later and I was back to where my original cable-car dropped me off. I now had a choice: a) Pay to get the cable-car back down b) walk down my trail up yesterday. In order to save some money, I decided on the latter. Plus it would only have taken me 30 minutes or so and would give me one last opportunity to soak in the environment.

Upon approaching the path along with a few other keen trekkers, a sign indicated it was closed for renovations. This was the only path which led down the mountain. The foreign trekkers amongst us looked at each other with the same thought: How closed is it reeeeally? Only one way to find out. Turns out that sign might have been there for a reason. There’s not a more soul-crushing moment than realizing that the hundreds of steps you have just descended will have to be ascended again immediately. It made me all the more bitter having to pay for the cable-car again.

The silver-lining showed itself in the form of 3 attractive Chinese girls whom I shared the cable car with. Just like every other Chinese person over the past two years, they didn’t realise I could speak the language. I overheard such lines as “Wow he’s so tall…handsome foreigner…I like his tattoos”. I couldn’t help but smile, to which they realized I understood them. That gave them the confidence to ask for photographs with me and JUST of me (which was much weirder). By far my favourite roughly translated comment went as so:

“….but I thought foreigners were fat? There are a lot of foreigners in Shanghai, and they’re all fat! He’s not fat, he’s handsome!” Thank you for the boost of confidence ladies.

Next stop will be my very last in China, a city I could have spent the last 2 years of my life at; Shanghai. Time to see if I made the fight decision.

The 10 Best Highlights To See In Busan 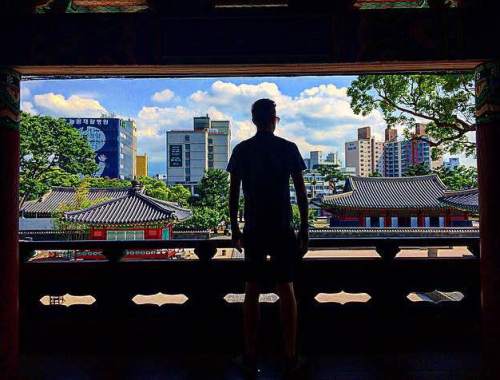 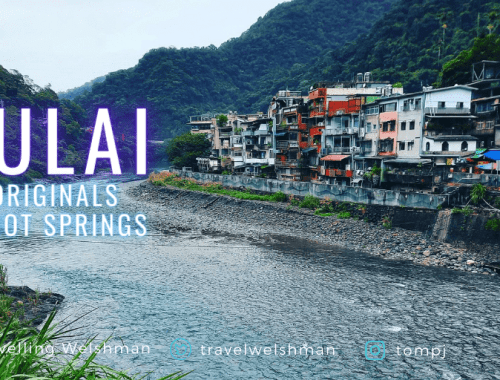 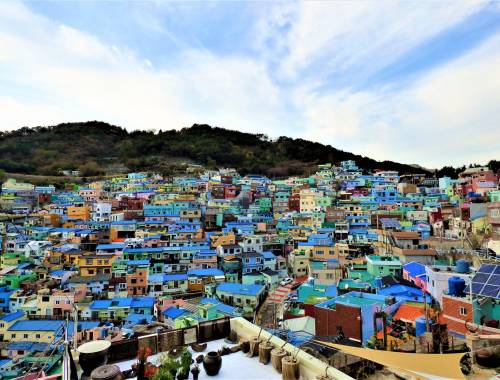