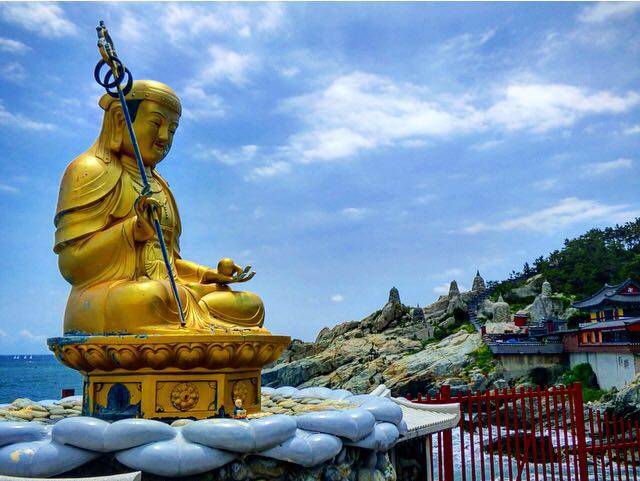 For an extensive guide on Busan’s attractions, accommodation, cuisine and travel info, check the guide here!

To visit anywhere once is a privilege, to visit there twice is a blessing. I last visited Busan almost 6 months ago, and since then I declared its once of the best places I have ever visited, a point to which I hold strong to this day. I’d be lying if I said this stop was not intentional. Busan seemed like the perfect place to spend some more time before my flight the next day.

As I slipped in-and-out of slumber on the bus from Gyeongju, I was quickly awoken by a warm embrace which soothed my exhaustion. The ever so familiar mountainous ranges with the megalithic tower blocks before it. The powerful unrelenting development of a booming city kept in control by the ever-so snug protective mountain backdrop. I was back.

Busan was close to being ticked off the list, however there are always a few things that are unwillingly left out. I was gifted with a second opportunity to see them.

I arrived mid afternoon, therefore not much could be done, except for one very important thing. A day or two after leaving the city last time, naturally the first thing to do was to update the Instagram. I got followed by an account that immediately got my attention just by the name, filling me with regret for missing it off the list. It was an account for a café by the name of “Raccoona Matada”…a raccoon café. You could imagine my disappointment.

I would be lying if I said my detour to Busan wasn’t majorly influenced by wanting to go to this very café. Therefore 5 minutes within finding my hostel, I was already headed to the subway to find the much anticipated café. Being the nature of Korean cities, finding a particular destination within the mind fuck of tower blocks with businesses on each floor made it tricky to find in my haste. Eventually I found it and briskly made my way to the correct floor.

Upon arriving I was told to select which drink I’d like. Naturally, this was a must, as the drink essentially equated to the price of admission. No drink = no raccoons, fair enough. I then had to guzzle down the coffee in a separate area with a laminated sheet of instructions. They were to the effect off; take off your jewellery, no feeding unauthorised snacks etc.

I was then let loose into the raccoons area, which consisted of a number of high shelves which they seemed to adore and oversized play areas. Initially they seemed uninterested, in-fact most were relaxing without a care in the world completely ignoring my presence.

Nothing a tactical pack of raccoon snacks wouldn’t fix, which conveniently enough the cafe sold. Suddenly they were alert, and ever so interested in what I had to offer. Like a timid child they would spot the treat in my hand and cautiously stretch out both arms to grab the snack before immediately pulling it back to nibble with both hands still grasping around it.

Please sir, may I have some more?

Never have I wanted an exotic pet so much in my life. Miniature innocent little teddy bears that couldn’t be cuter if they tried. I spent the most part of 2 hours there, as much as I felt I’d outstayed my welcome for the single drink I’d purchased.

Just so you know, I’m here for you

As far as I was concerned, my day was complete. I’d experienced what I had envisioned for almost 6 whole months, damned that i’d missed the first opportunity and blessed with a second. I spent the night on the roof of my hostel basking in the city’s bright lights.

The only life I’d ever want to live

The tower blocks and neon lights illuminated me as I worked away in the spectacular backdrop of this god damn amazing place. I was sat there thinking how typically I loath big cities, and how Busan was the only place as of yet to change my attitude.

With a flight to catch in the afternoon, my time was limited. I had only a few hours to tick those few attractions I’d missed during my last visit.

The start of a new day, and I was suffering from withdrawals from not seeing a temple for more than 24 hours. During my last time in Busan, the temple was Beomeosa. It was a spectacular example of a temple nestled amongst the peaceful and secluded mountain ranges. I found it hard to believe I could see a better one in the area. However the temple in question claimed to be the “most beautiful temple in Korea”. This must have been an indication of how stunning it would be.

My target for the day

My reasons for leaving it out last time came apparent, as it was a bit out of the way. It required taking a subway almost to the end of the line, and then jumping on a bus for over 30 minutes. Considerably more work than the rest of attractions Busan had to offer.

Stairway to a peaceful paradise

It became clear I was getting closer as merchants selling various snacks and trinkets started popping up forming a path towards the temple. The merchants slowly subsided and gave way to the simple unaltered beauty of the temple itself and its surroundings.

The beauty of a temple on the coast

The temple itself was right up against the coast, with the waves essentially crashing against it. Statues of the Buddha and various halls were placed along various points across the cliffs. The sound of crashing waves became the rhythmic beat to the chanting of prayers across the temples grounds.

I had also intended on returning to Taejongdae to see the remaining parts I’d missed last time, but time was too short. I couldn’t afford to miss the flight. So alas, yet again I had to leave the city still with sites unseen. Maybe a 3rd trip to Busan is on the cards.

Next stop, and what is to be my last on my Korean adventure, the much hyped: Jeju Island