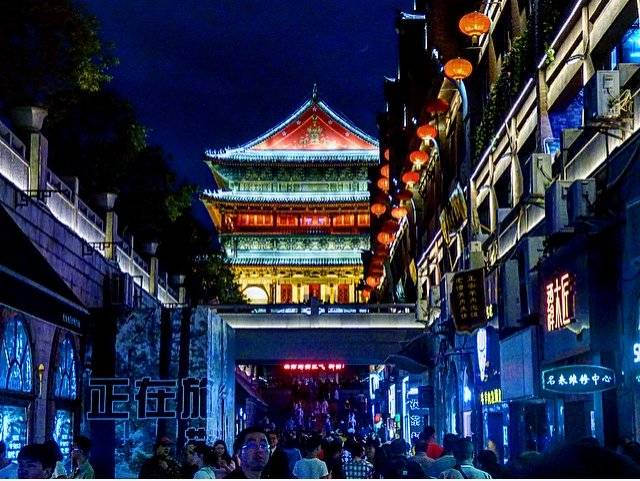 Xi’an is a city with immense history, stretching back to the birthplace of ancient Chinese civilisation. As well as being the former imperial capital for successions of emperors and dynasty’s, the city became the terminal end of the Silk Road, bringing with it influence from the Middle East. The city is also home to one of the pinnacle tourist attractions in the whole country. A site known the world over, often labelled as the 8th wonder of the world. None other than the mighty Terracotta Warriors.

To get to Xi’an from my HQ in Beijing, I had 2 realistic options; train or flight. Due to my pure hatred of flights, it wasn’t even considered. It would also give me the perfect opportunity to experience an aspect of Chinese train travel I hadn’t yet. That was to ride on a sleeper train.

The option for the beds are only available on the slower trains (and thus cheaper). I went for the Hard Bed option, which consisted of stacks of 3 bunks with 6 to a “cabin” which actually had no door, just simply open to the walkway. I still pictured those movie scenes of smoke filled carriages and raucous drunk locals stacked atop each other. Thankfully its nothing of the sort.

It was surprisingly cosy as fuck. Even for a man with a 6ft 4 frame I still had plenty of room to get comfortable. Despite it being packed to capacity, you had such an increased amount of space and freedom compared to having a seat. It was fucking glorious.

On-board the sleeper train to Xi’an

The first half was spent in glorious slumber tucked in under my thick sheets and pillow provided while being rocked slowly by the train chugging along with its rhythmic clunks. Admittedly I had to remain permanently horizontal, but freedom to roam the train and things to keep me preoccupied for the remaining time made it a fantastic journey. Absolutely from this day forward the number one choice for travel. I arrived in Xi’an at 4am and the ever-reliable Chinese app didi was used to take me to my hostel.

My home in Xian, the Han Tang Inn

Bit of a hiccup as I arrived at the hostel with the doors open but a ghostly empty reception. A sign indicating 24-hour reception didn’t appear to be the case apart from what appeared to a corpse beneath a sheet laying behind the bar. Excessive coughing and singing of the bell didn’t raise the dead. Eventually a phone call did the job only for a very grumpy awoken girl indicated they didn’t have room for me (despite my booking) and directed me to a hostel down the street under the same name.

The inspiration to come here in the first place was down to one thing; the terracotta warriors. Why start anywhere else? I’d researched that a public bus left from the railway station regularly. I was warned of scouts who’d wave over unwitting tourists to take them to the warriors only to scam them by way of overcharging, taking them to another place or some other means.

That’s what made me cautious at the woman waving me over to a line of coaches. It did however have decals on the side indicating it was a tourist bus between the station and the attraction (and others along the way), which there were several lined up. Turns out these were legit tourist buses, the only difference from the public bus being added comfort and air-con, but being double the price. However, at 14 RMB each way, it’s hardly expensive.

Despite this, it didn’t take long to try and make the journey unbearable. Within 10 minutes of our hour-long journey, the queasy teenager beside me began vomiting on the floor. Being as I had a window seat, I was trapped, and he had no real concern I was there. Half-assed attempts by him to dab at the mess with tissues didn’t stop it from running onto my shoes.

We arrived at the site of the Terracotta warriors, where the entire population of China had descended upon. Let me tell you one thing, nowhere else in the world will ever be busier than a Chinese tourist attraction during a national holiday. Its fucking maddening. The Chinese have a saying 人山人海 (people mountain people sea) which is precisely how to describe the scenes.

This is an enormous problem when it comes to travelling, because it takes the shine off the entire occasion. Its hard to lose yourself in the moment, to fully appreciate where you are and soak it all in. It’s made impossible when your main concern is pushing yourself through the crowd, trying to find space to actually have a look, not able to stay and glare in wonderment from the inpatient horde behind trying to push forward for a better look. It’s a real shame.

The excavated pit and the ominous statues within

Regardless, it was absolutely spectacular to witness a truly unbelievable spectacle. It describes itself (as many places admittedly do) as the 8th wonder of the world, and it would be hard to debate against it. Although only displaying a small proportion of what once laid buried beneath the surface, the number of which remain, and the number and vastness of the sites discovered is astonishing.

The warriors in battle formation

The area is divided into the different excavation pits, each of varying size and number of statues found within. Without doubt the best of them all with be Pit 1, where you get the greatest numbers of statues lined up in original form.

The awe-inspiring site of the Terracotta Warriors

Another astonishing fact about the warriors is that no two warriors are alike. Each have completely unique features, which makes it even more fascinating. Its even said that the statues were crafted to emulate real warriors.

The ever changing faces of the Warriors

As the result of the enormous crowds, I spent quite a large amount of time at the warriors, and had little time to visit any other attractions. I chose to head for Qinglong Temple, known for its abundant cherry blossoms. Being that China was entering spring, I thought it was the perfect place to visit.

The beauty of China

Naturally this also would be a major tourist attraction as every wanna-be Instagram superstar led their boyfriends briskly around the temple before demanding him to take pictures of her playing candidly amongst the blossoms.

Qinglong Temple in the spring blossom

By now it was dark, and all the attractions had closed. More importantly, I hadn’t eaten yet.  I had just the place to go. You might be surprised to learn that Xi’an has quite a strong Muslim influence, as was I. Historically the city was the Start/End point of the silk road, bringing with it Muslims with their culture and traditions to the region whom began families with the local Chinese.

The chaotic flavour filled streets of the Muslim Quarter

Evidence of the everlasting impression left is found in none other than the Muslim Quarter. A series of streets of complete and utter marvellous chaos. Endless repetitive lines of snack stalls and incredibly eager and enthusiastic merchants trying to draw you in. All manner of dishes lost in a concoction of Muslim, Chinese and specifically local Xi’an cuisine.

If you are a foreigner in China, you will get stared at. This is pure indisputable fact. Even in the likes of a densely populated metropolis like Beijing, daily stares and the odd sneaky picture taking will occur. Travelling deeper into the more obscure and less populated area exacerbates this even more.

I wish I was exaggerating that every single individual that passed me on the streets of Xi’an would stare. The only reason someone wouldn’t look at me was because they didn’t notice me coming. I should be experienced with this kind of treatment but the amount it happened that first day got to me. It gets intense particularly if you’re no in any mood for it.

I was determined to be more productive and had a number of places to hit. The first and foremost needed me to head back on the tourist bus. This time it was headed to Huaqing Hot springs.

Palace fit for an Emperor

This was the Emperors former summer house complete with a number of immaculately designed pools fed by the water running through the mountains behind. It was a glorious example of astonishing Chinese architecture designed in such an angelic environment weaving amongst the hills. The perfect place for an emperor.

The next stop was a probably the most famous temple in the city, home to an immediately recognisable structure. The lesser known Da Ci’en temple is home to the much more renowned Giant Wild Goose Pagoda. A vast concrete structure that reaches high and gives a panorama of the area.

As with any decent Chinese attraction, it comes with its own mythical tale. Its said that the monks that resided in the temple had a shortage of meat, and prayed for more. At that moment a gaggle of geese came flying above the pagoda, and the goose at the front fell to the ground with broken wings. From that point forward the monks vowed never to eat meat again, and dedicated the pagoda to that fateful goose.

The gardens that within the temple

The second was curiously named Small Wild Goose Pagoda. As the name would suggest, not on as grand a scale as its kin, however its made up for by surrounding it in an spectacular natural surroundings. As well as that, close by is a small collection of buildings showing local crafts and local merchandise.

The Small Wild Goose Pagoda and its beautiful surroundings

My next stop was a dominating figure in the city, an extraordinary reminder of the sheer extend of power and might the dynasties that ruled this nation once had. That was the still complete city walls that to this day surrounds the city centre. The walls can be breached at many points, but I chose the South Gate, the much more immaculately designed of the lot.

The southern gates of the city walls

From here you could potentially walk around the entirety of the wall, even hire bicycles to make the journey with extra chunky tires to cope with the cobbled stones. The entire walk providing a spectacular view of the city, particularly as the sun goes down.

The walls at sunset

From here I took time to sit and observe the Bell Tower. I did have the option of paying to enter, but in this instance sitting as I observed the spectacularly preserved and immaculately designed structure in the middle of the chaotic encircling streets. Much like that of the Arch de Triomphe and the Colosseum.

A short walk through the near-by retail streets was the Drum Tower. This time I decided to give it a look, after which I couldn’t hep but revisit the Muslim Quarter as the sun went down.

The Drum Tower as seen from the streets