Beijing holds many extraordinary historical artefacts that honour of their mighty historical power and significance. The sacred UNESCO site is visited by millions of foreigners and locals alike paying their respects to the nations forefathers. The mausoleums of the Ming Tombs ceresing the southern edges of the Tiānshòu Mountain remain as a genuine site of homage to former emperors of a once mighty dynasty.

At first, I envisioned a closely scattered array of marvellously decorated tombs, perhaps around an immaculately designed water fountain. However, that’s not the case. The entire complex of tombs are scattered far and wide around the base of the mountains.

This UNESCO World Heritage Site is situated in the out-stretching county of Changping to the North-West. Being in such close reach to Beijing’s centre, along with the site’s historical significance, makes the Ming Tombs a popular hotspot for tourists and natives alike.

An important point to consider; the Ming Tombs complex isn’t a one-stop attraction. Its scattered widely across a large area along mountain edges. Each individual tomb is a considerable amount of distance from each other. A few keen adventurers walk the distances (although more authentic), however the quick thinkers take advantage of the public transport.

As much as it appears, this isn’t a haphazard layout. Its apparently very carefully designed with feng shui principles attempting to demonstrate the good fortune brought by the dynasty. 13 of the 16 Ming dynasty emperors were buried in this complex of tombs, however, not all can be visited. Only a few tombs are open to the public; 3 tombs in-fact. The only tombs being Changling Tomb, Dingling Tomb, and Zhaoling Tomb. Both Dingling and Changling receive the most visitors.

Opening hours like most at Beijing’s attractions depend on the season. April-October 8:00am-5:30pm and November-March 8:30am-3:00pm.

As each tomb is essentially their own attraction, each site has individual prices of admission, again varying by season:

Due to its proximity to Beijing, there is a subway station (Ming Tombs Station) that will take you most of the way. However, the name is a false promise, as its still another 2.5 miles away from the complex itself. Be prepared for a long laboured walk.

The subway will however will cut down a considerable portion of the journey. If you take the subway to Chongping Dongguan, you can take the number 314 bus the rest of the way to the tombs (making sure its heading West). Once you’re dropped off at one of the many destinations worth seeing, it’s easy to hop on the number 314 bus between all the hotspots. 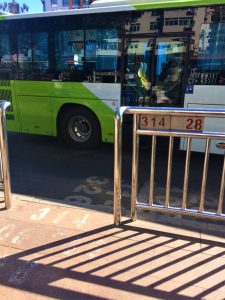 Its also possible to get to the tombs directly from central Beijing all the way by bus. The bus number 872 from Deshengmen Bus Station takes you directly to the tombs. Other than this, there are no other real public transport options to the Tombs. The remaining option is the extortionate prices of taxi’s/didi’s.

The first destination you’re likely to arrive upon of the incredibly vast complex would be the sacred way. Passing through the Red Gates, you’ll begin the same journey towards the tombs as those have for centuries. Formerly known as the Road to Heaven; this was the pathway the former emperors were returned to where they had came; heaven.

The Red Gates; the entrance onto the sacred way

Passing through the gate unveils a picturesque expression of tranquillity of nature and peace. A suitable environment for the royalty being laid to rest. The Sacred Way; as it’s known today, is a long straight paved walkway extending its way toward the mountains. The arrow-straight path is surrounded on either side with spectacular streaming willow trees and consecutive statues lining the edge of the paving stones.

Take note of the meticulously selected paving stones; the central stones appear much more pristine and given noticeably more care. This is an intentional piece of design found in many artefacts in Beijing (such as the Temple of Heaven). The central stones were used solely by the emperor, where the flanking deteriorating bricks were reserved for the other peasants.

One of the officials overlooking the Sacred Way

Some of the most striking statues are dedicated to former government officials considered important to the dynasty. These would include some immaculately designed generals that appear to stand guard for any passing royalty.

One of the many animals lining the Sacred Way

The rest of the statues represent several different animals, each with their own significance and unique symbolism. Each animal is has four statues, two of which kneel towards the pathway. The animals include lions (for solemnity), camels (for the vast territories the dynasty controlled), elephants and horses (due to their significant importance to the dynasty’s success).

The others include two mythical creatures; a xiezhi (a kind of unicorn) to ward off evil spirits with its ability to sense right from wrong. The other is a qilin; one of the four divine animals (the others being a dragon, phoenix and tortoise). The myth goes that the animals change guard come midnight.

The walkway to Changling

This tomb stands as the largest and oldest tomb of the whole complex, housing the resting place of Emperor Yongle (1402-22). Along with the mausoleum itself, there’s also a stone statue commemorating the same man. The surroundings also include some immaculately designed halls and palaces, and some small exhibitions of clothing and artefacts.

The tomb itself contains a few artefacts from the time of the dynasty. Examples of authentic pottery that were found at the site are displayed. In the central chamber also holds the throne of the emperor and the empress. You’ll also be able to view the site where the original tombs once stood. 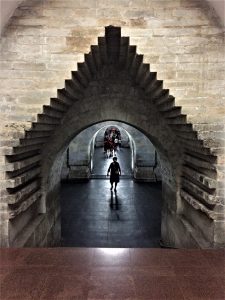 The underground entrance of Changping Tomb

The coffins that once held the mighty emperors had sadly deteriorated beyond repair upon the tombs excavation. As a result, you’re only able to see where the coffins once laid upon large concrete slabs. There’ll also be some extravagant red replicas to give you an idea, however look a bit more of an eye-sore in the otherwise striking tomb.

You’ll also notice a considerable amount of money donated at the base of each of these relics and artefacts. The biggest piles of cash illustrate the sites of most significance. Even the completely bare concrete paving slabs have piles of cash lining its edges. These endless donations are for the emperors that once laid here.

The Emperors chair with its donations

Upon leaving the tomb you’re directed towards the stairway that allows you to look back towards the entrance gates leading to the tomb and the entire area alike. It allows you to spot other unmistakably immaculately designed Chinese roofing indicating sites of other tombs around the mountains base.

Entrance-way into the Changling Tomb

From certain points within the tomb complex you’re able to see just how vastly spread out each tomb is. You see the distribution of similarly designed architecture surrounding the base of the mountain range.

Dingling as seen from Changling

Dingling is the other most visited tomb, and possibly the most immaculate. It was built for Emperor Wanli (1572-1620), his beloved wife and charmingly his favourite concubine (side-chick). Demonstrating the power and bravado of the dynasty itself, the construction of the tomb was even completed before the emperors 20th birthday.

Another selling point is the fact it’s the only fully excavated tomb. The tomb itself also includes an underground palace. Much like in Changling no genuine coffins remain, as they decayed and unsuitable for display. Instead they have been replaced with replicas. Nearby will also be the Museum of the Ming Tombs, which holds a number of items excavated from the tomb itself, such as two imperial crowns.

There is an important consideration when it comes to travelling, that usually comes with time restrictions. Is it worth it? Its unrealistic to see everything, so when it comes to pick-and-choose, is this a must-see or not?

Well frankly if time really is a factor, then you can rest easy if you choose to leave it out of your itinerary. Despite its cultural and historical significance, it doesn’t have any more than that found at the Forbidden City or the Summer Palace. If its an incredibly jaw dropping experience you’re after then there are better ones.

The other negative is its accessibility, its a fucking ball-ache. It essentially requires an entire day to visit, most of which wasted on the travel. Also as a result of the size of the complex, most often visitors find themselves only having time to see one or two of the sites. Of course many travellers choose to combine the tombs with a visit the near-by wall. However if you have a limited number of days to see Beijing, then a stop at the Ming Tombs isn’t necessary.