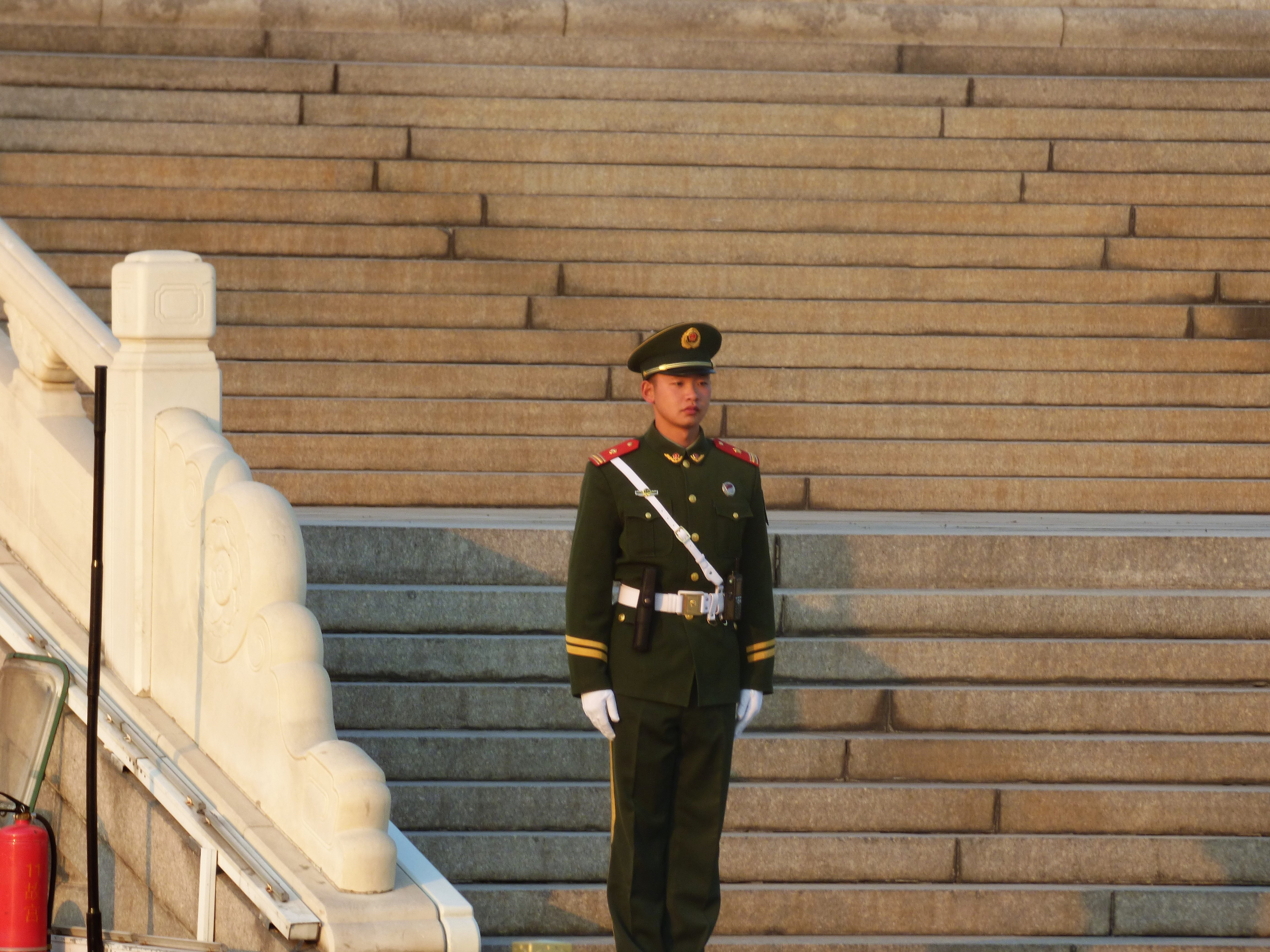 On first impressions to the bewildered traveller, Beijing might look like the most secure and protected city on Earth. The sheer number and variety of security found throughout this enormous capital makes it seem so. It can leave a very confusing impression, particularly after some lasting observation.

Of course there’s plenty of malicious rumours and opinions on China when it comes to issues like communism and dictatorship. So such a tight strangle hold is to be expected, isn’t it?

Let me give you my typical commute to work. First, I’ll pass the security guard at the bottom of my tower block and another who’s sat in a little booth beside the fob-requiring gate at the end of my compound. I’ll then pass a police booth, which are posted on the corner of certain streets in the city before I enter the subway. Here I’ll face a team of security who’ll pass me through a metal detector, administer a pat down and wave their handheld detectors as my bag is scanned. I’ll then pass a series of security guards and soldiers posted throughout the station before getting on-board the subway where you might find another security guard waiting. More security will be doing the same at my destination. I’ll pass yet another police booth and several members of security assigned to the building before I get into the office.

Police patrol booth at the end of my street

They are literally everywhere. There’ll be security posted at the end and throughout residential streets, regularly walking through keeping check. They’ll stand guard outside and within certain buildings and are multiplied in places of significance. You’re likely to find one absolutely anywhere you’ll be in Beijing. You might actually spot a riot shield laying around in certain places. These are ready to be used along with a long pole with a horse-shoe end designed to keep an angry mob at bay.

Not sure what they soldiers are doing, but it looks serious

Each time you enter the subway is like going through the worst part of air travel 2-4 times a day. At each entrance you’ll be passed through a metal detector and a baggage scanner before getting a brief pat-down. And just like the airport, certain items are simply banned. This includes flammable materials, like a brand new can of deodorant will simply be taken off you.

You can’t help but get the feeling that you’re constantly being watched, and in many ways, you are. Immediately upon your arrival in China you’ll have to register the location of where you’re staying with the police. If you’re lucky enough to be in a hotel or hostel, then it’s done automatically for you. If not, you’ll have to find the police station assigned to your neighbourhood so they can browse and scan your passport/visa.

You best keep your passport handy, as you’ll need it at more than one occasion. You’ll be required to show them to enter certain tourist areas or places of real significance. There have also been instances where you’ll have to show your passport just to buy certain products i.e. a knife. This kind of makes sense, if you’re not trying to live in Beijing.

As an illegal worker, I’m also in the line of fire. If the police were to recognise my real reason for being in China, I would be deported. Numerous English schools throughout China are raided for this very reason, hunting illegal foreign workers.

All this security sounds incredibly oppressive, the feeling of being watched 24/7 wherever you go. So why is there so much? Some might say its to secure the Communist control of China, ensuring that there’s no challenge to their authority. Its fact that protesting is actually illegal in China, and any of those who oppose it has felt the wrath of this security.

As concerning and a little frightening as the large shadow of Beijing’s security may first appear, closer inspection answers a lot of questions and relaxes the nerves. As time passes, certain things are noticed about the “security” and why such numbers are seen.

Some members of security

Obviously, there are different types and levels of security. The most basic of which appears to be the security posted at the end of residential streets and various points within. Again, superficially it appears very oppressive having guards walking within your neighbourhood. On closer inspection though, these security don’t appear as aggressive and oppressive as first thought. They’re mostly older gentlemen, occasionally sat on a chair playing on their phones looking freezing cold. They don’t seem to be eagle-eyed listening out for commotion at any second. They’re not the Queens royal guard, gun in hand not flinching. Frankly you question what men of such age could do if shit got out of hand.

Another type of security are the ones found at the entrances of subways. Firstly, the staff are all young adults, possibly their first ever job. They sluggishly pass people through their checks, waving the metal detector in the relative direction of the people passing. Their hearts aren’t in the job, they’re simply bored teens doing a job that’s easy to get.

This is unless, someone’s watching. On certain days passing through the same security you’ll notice that the teens are a bit more thorough and strict. You get the impression that someone from higher-up is watching and they have to look like they’re trying.

Another very important point to consider is “if you look official, then you’re official.” Take my job, I’m illegally working. English schools throughout China are regularly raided by police to fish out people like me and deport them. Teachers will regularly have to hide to avoid the police. My school and others like it however coincidentally avoid this sort of treatment. Luckily enough, we get a helpful heads up to when the “raid” will be, so foreign teachers can keep away. This is a privilege which costs.

Not to mention security guards posted throughout the city and particularly within hotels participate in prostitution. Some will happily hand out client cards underneath hotel doors for a very happy pimp, and enthusiastically wave his workers through.

One could make the argument how is being watched 24/7 is no different to being back in the UK, a country which has 20% of the worlds CCTV cameras. Here the void of CCTV (even though there still will be some) is filled by a human being. On the surface such an extreme number of security does make one nervous and an undeniable feeling that you’re being watched, however closer inspection finds that not really to be the case. Even if the governments intention is so have a subconscious stranglehold on the capital, most of the men and women hired to secure the city are not extensively trained killers or government spies, its just a job.

Another very strong argument, with the amount of crazy shit that’s going on in some major cities across the world, suddenly such strict security doesn’t seem so stupid. Hearing of any trouble in the streets of Beijing is incredibly rare, which admittedly would be a combination of outright fear of the consequences or stifling the stories from the media and the people. Needless to say, you at least have the undeniable comforting feeling that its likely that something will happen, and IF it does, you’d be that much more safe.